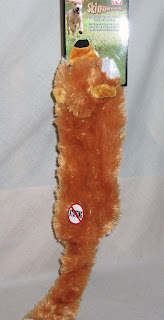 Hey, everydoggie! Remember our PSA about the Kong Wobbler? Well, those same peeps asked us to do a review of the Skinneeez stuffing-free dog toy. The one they sent to us is a Forest Series Fox and I have to say: he's mighty tasty! 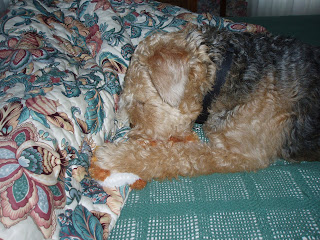 As usual, I (Patches) wouldn't let Penny come near Mr. Foxy! He might not have any stuffing, but he does have a squeeker in his tail and that spells FUN! Okay, maybe not so fun for Mom since I have been squeeking him non-stop since she gave him to me. 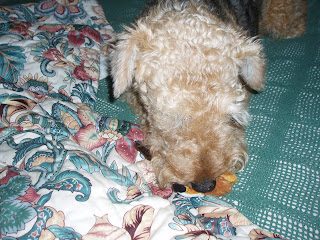 We have heard some stories, lately, about a doggie who ate stuffing out of a child's plush toy and got really, really sick and eventually went to the Rainbox Bridge! Now, our mom has always bought our stuffies at yard sales, so they aren't really meant for doggies...just for kids (who, hopefully) are smart enough to NOT eat the stuffing! My favorite way to enjoy my stuffies is (1) remove the eyes, no matter how long it takes. (2) pull lots of stuffing out through the eye-hole and (3) remove as many limbs as possible (assuming the stuffie is an animal of some sort). Oh, and I almost forgot: (4) if the stuffie is large enough, I HAVE to perform my secret ritual on said stuffie! Now, Mr. Skinneeez Foxy isn't large enough to perform my secret ritual because I would fall flat on my snooter, but he sure is fun to shake like crazy...just like we would do with real prey and he's totally harmless since there is no stuffing! Not to mention that he will last much longer than our usual stuffies. In this house, one of our usual stuffies starts to lose stuffing within 1.3 seconds after entering our jaws of death!

So, let's see...no stuffing to make a mess that our peeps have to clean up or that we eat and get really, really sick (or worse), no plastic eyes for us to rip out and that squeeker in the tail makes it the pawfect dog toy! We give it 8 paws up!

Sorry, everybuddy, I gotta run! While I have been in here barking stuffs for Mom to type, Penny is in the living room squeeking Mr. Foxy and I HAVE to stop her! NOW! 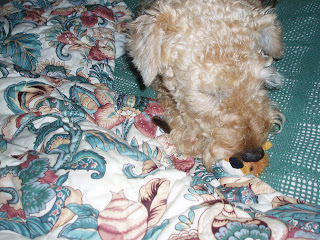 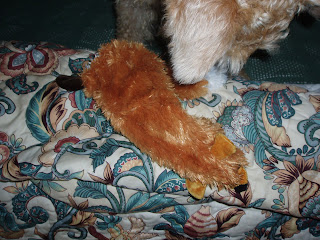 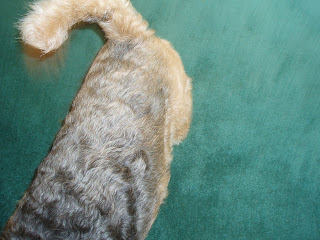 Posted by Princess Patches at 11:47 AM

Hey! We got some of those to review too. Momma is being lazy about opening the package. However I will say that PeeWee managed to eat part of the last one we had and get terrible sickies. Yuh, he ate it's belly and it came out PeeWee's bottom like a big handkercheif.

I bet shaking those really brings out the terrier in you two.

Did I hear you say you'd be mailing out samples? ;)

What a good review. 8 paws is a good rating. We have a couple flatsies (that's what we call 'em) but I (BabyRD) don't seem to enjoy them as much as the ones with guts. Hootie loves his flatsie that his girlfriend Sally Ann sent him. He tosses it up in the air and has the funnest time with it! Hootie said to tell you to SHaRe with your sissy.
AireSmooches,
BabyRocketDog

We've had a couple of those flatsie stuffies and Mitch loves to anchor them down with his paws and pull really hard until their heads come off! That boy is just bad news all around!

I have a skhwirrel one!

Khousin Merdie has fun with it!

We wonder how long does it take to get the squeeker out??
Thats the first thing we like to remove, when disemboweling a stuffie!
Oh, but we do love shaking the furry toys!
Wyatt and Stanzie

We love those here at our house. Glad you got a chance to check them out!

We have that toy, and it sure fun. I have de-squeaked one sqeaker, but I can still play with it. Andy likes it also, and I let him play with it sometimes.
Sally Ann

I love those toys! I have a couple but my new brother Sonny has claimed them as his own. Hmpf!

Toys without stuffing can be de-squeaked and torn apart as easily as toys with stuffing. Heh heh.
Miro
Leaving nothing for me.
Alanis

Yall have the best jobs getting to be toy testers!! That looks like a fun toy!! It's hot as blazes here in AL, too!! I'm about ready to head down under and cool off!!
Love,
Janie

Good job on testing the fox toy! We like those flatties too.

Penny and Patches,
So so happy you came by to visit with us!!!! We love your visits!!
I love that toy!! Bambi treas up a toy in nothing flat!!! It might last for a little time!!
Come and visit more often OK??
XXOO, Bambi & Fern

You are doing a pawsome jobbie reviewing these toys!

Where did you see the job advertised? We really like that idea.

WE LOVE THOSE STUFFIES well really they aren't stuffies are they!! We SHAKE SHAKE SHAKE them!!!! Yes how can we get this cool job!! love A+A