We interrupt this bloggy for a public service announcement (aka advertisement)! 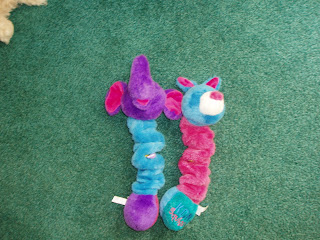 Hi, everydoggie! It's me, Patches! I get to do the posting today because I am a toy HOG! We have been asked by the nice peeps at the Kong Company to test out one of their new doggie toys. It is called Kong Squiggles and boy, is it FUN! 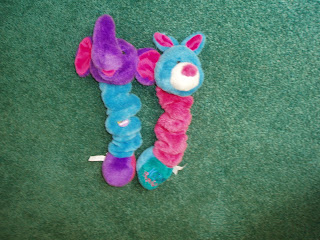 They each have a stuffie head with a squeaker inside and and a teeny tiny bit of stuffing (so we make less of a mess once we do surgery on them. The butt (or bottom end) has a squeaker inside, too for twice as much fun! The middle has some kind of twisted squiggly thing and when you shake it, it's kind of like playing tug-of-war with YOURSELF! It's a good thing too, 'cause Penny thinks she is too dignified to play tug with me! 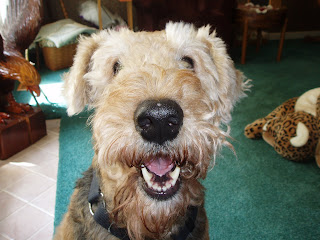 Aunt Wendy happened to be at my house when the Kong Squiggles arrived. She grabbed one and made me chase her to get it. She let me jump on the big peepol bed! (Normally, I am not supposed to be up there. Shhhhhhhh...don't tell my mom!) I have been having loads of fun with our new Kong Squiggles! And our mom is looking forward to a much smaller mess when I go all "ninja" on it. I haven't done it YET, but believe me, the time WILL come! 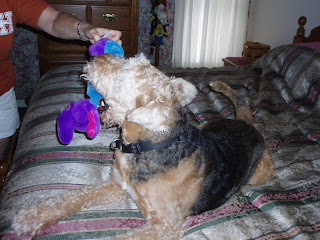 Penny (who is usually the squeaker queen)has even played with hers a few times! That's when I LET her! She might be the squeaker queen, but I am the keeper of ALL the TOYS in this house. We give the Kong Squiggles 8 paws UP!

We know a lot of you are wondering about Penny. We will be back in a couple of days with a PUPdate! (She's doing okay, for now)!

Aire-hugs,
Patches (and Penny too)
Posted by Princess Patches at 9:19 AM

Hi Patches and Penny, squeaky toys are lots of fun. My Sheltie brother and sister don't really care about squeaky toys at all. But that's okay, because Owen and I get all the squeaky toys. So Patches, yes, you have to share with your sister too.

Those squiggles look like a lot of fun. We don't want to ruin our reputation, but we don't destuff our toys as quickly any more. Are we getting too old for good terrier fun?

Wirey love to you two and your mom!!!

That sure looks like a super fun toy! Mitch wants to know if he can play tug with you, Patches?
We love your new header photo! What an awesome smile!

those toys sure do look super fun!

BowWowzer, those squiggles look like fun! We are always looking for toys that don't get ruined within minutes. You KNOW we have to try!! bol.
Smooches from pooches,
BabyRD & HOotie

That looks like a good toy...and you haven't ripped it up yet? Is it really Airedale proof?

We got some of those from the kong people too, but they did not last long. Always good to get free stuff, though. Good news about Penny.

In my house, Mr. Jaws is a squeaker-killer and toy-ripper. Nothing fuzzy has ever survived.

Oh wow we would love to get our paws on some of those, they look terrierific fun.

Have a good weekend Penny and Patches.

Great toys you got there:) Looks like you are having loads of fun with them.