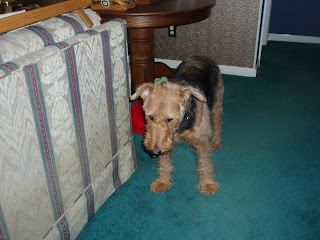 Hi everybody! It's me, Poppy! We wanted to remind everyone to go over to Deetz's bloggy and vote in the scary eye contest. His blog is http://deetz-scaryeyecontest.blogspot.com in case you don't know where to find him!

I'm a little purturbed with Mom, today, since she keeps calling me an Atlanta driver! I follow her everywhere she goes and she says that I always pull out in front of her and go very slowly...just like an Atlanta driver! Poppy's mom here: Poppy, you know, you could just follow me instead of being in the lead. When I'm on my way through the house, I usually have a purpose for going where I'm going and it makes it kind of difficult when a hairy Aire-girl steps in front of me and moves at a snail's pace. Poppy here: But, Mom, I'm just trying to keep you from going so fast that you hurt yourself! And what's up with calling me an Atlanta driver?

Mom here: Atlanta drivers are famous for pulling out in front of me and driving about 5 miles per hour when the speed limit is 55 mph. Then they weave all over the road so I can't pass them...just like you do! Of course, if I run into YOU, it isn't as big of a deal as if I ran into a real Atlanta driver. Now...do you understand why I call you that? Poppy: Well, no, but whatever! Let's talk about the birdies! 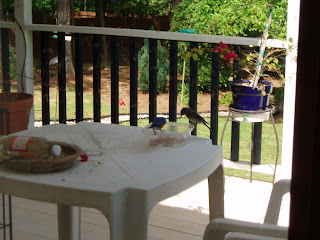 These next two pictures are of our Bluebirds, Mason and Mena, when they come to the table to eat meal worms. Sorry they are kind of dark...Mom took the pictures from inside the house and it was early evening so they aren't very bright. 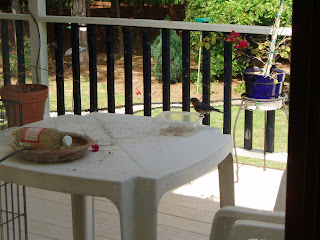 When Dad takes the meal worms out to the birdies, he claps his hands and calls the birds and about 2 seconds later, they come to eat. He's got them trained! Mom took a video of the birdies eating, but stoopid blogger ate it. She will try again, later, to upload it. We still think the birdies have eggies in their house because Mena spends a lot of time in there. Sometimes, when she's in the house, Mason delivers worms for her to eat!
We can't figure out what is going on in the Chickadee's house...we see the mama and papa bird coming and going, but we don't hear any baby birdies peeping! Maybe it just hasn't been long enough. We can't remember exactly when they started building the nest. Dumb Mom forgot to write it on the calendar!
Aire-hugs,
Poppy & Penny

Posted by Princess Patches at 11:05 AM

I'm never in a hurry to go anywhere either, Poppy! Your mom has to realize that you're slowing her down for her own good!
We think the bluebirds are just beautiful! How neat that your dad has them trained!

I don't know if I am fast or slow all I can say is that I always want to be the first...tuuut tuuuut....
Those birds are so cute. Maybe your Dad trained them because he cannot train an airedale.....
Kisses, Faya

Poppy youre so adorable! Always need to have the lead. Cute birds, Im surprised you dont play with them. I would!

hi kiddos, we are Atlanta drivers too. we don't know why humans always have to be in a hurry. it's odd. humans are odd.

our mom likes your bluebirds. she would love to have some wild birds but we would just chase them all away. that's just us.

Mom is totally impressed with the bluebirds - she wanted me to tell you that. She gets annoyed with us around the house sometimes too. We like to be speedbumps. We lie in the doorways and don't move.
ECHO

Hi, friends!
I think I could be called an Atlanta driver too!
Sure it would be nice that those Bluebirds have their "puppy" birds soon!
I hope you had a great weekend
Kisses and hugs
Lorenza

Cool pictures of the bluebirds. We bet they do have eggs & they're probably about ready to hatch. The male will feed the female & babies. We have several bluebird houses up on our land & they use them every year. Do you get any of the wrens?? We get several kinds & they nest like crazy. Bluebirds sure are lovely birds to watch. Soon the hummingbirds will be back here in Iowa. We love to feed them.
Luv & Wirey Hugs!
Butchy & Snickers

I think you're doing good to slow your mom down so that she dont hurt herself.
Those bluebirds are bootiful.

We're not Atlanta drives we're Le Mons drivers hee hee. When we escape into the main part of the B&B we zoom up and down the hallway like crazies.
Can't wait to find out if little babies are in the birdhouse.

Hehehehe tripping up the humans is the best!

National Stuffie Appreciation Day is May 8th! Get out the best pictures of you and your favorite stuffies!

Why do humans gotta train everything?

Poppy how good and careful you are to your Mom. At least you never get fines for speeding. Me I just zoom in and out erratically, keeps the 2 leggeds on their toes you know and stops them from getting all stiff legged like Wally Wednesday.

Thanks for mentioning the voting on the contest...it has been so fun seeing all the photos of everyone. Those birdies wouldn't last two seconds with me there. I don't know what it is about them. I just want to eat them. Mum says she loved the pictures of hte birdies and cannot wait to see if there are babies.
Deetz

Your dad sure has those birds trained well. You must love watching them!

Our bluebirds are very elusive here, but one almost snatched Mom baldheaded when she peaked into the bluebird box last year. I guess she made it mad. I like your birds better.

i alwiz take the lead too...coz i wanna alert the human when there's something wrong infront.

(Hey! Sorry that was us on the deleted comment--the human can't seem to get the hang of this!)

Just wanted to thank you for your support on my first ever dog show--I didn't even get that kind of support at home! Plus, I think that it's really cool that you can share your home with bluebirds. We only have ugly birds at our house.

I've been over and voted, it's sure is a scarrrrrry eyes contest.I love birds, i always run out into the garden every morning to watch and listen to them.