Hi everybody! Thanks for joining us for Wheely Wednesday! I, Penny get to do the post today! First, I want to show you the mini Patches that Mom made. Ok, she had it finished before Patches came to live with us, so it doesn't have the white patches on it. Actually, it could be any of the 3 of us. 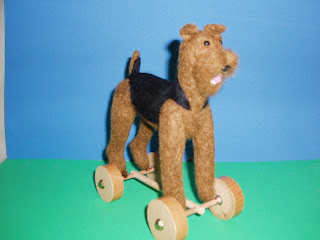 As you can see, it's a "wheelie" and it can get going pretty fast when it has to escape the jaws of death that at least 2 of us would like to put on it. 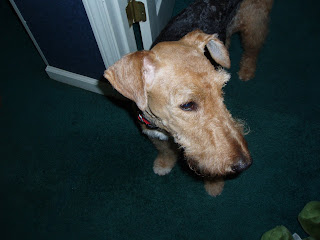 Patches is still trying to figure out whether she is supposed to potty inside or outside, but she's doing better. Mom and Dad let her be a free-range doggie, last night, for the first time. They didn't put her in her crate when we all went to sleep. She roamed around for a while and slept in two different bedrooms and even spent some time in her crate with the door open. She jumped on Mom at 3:18 this morning. Mom thought she might settle down and go to sleep, but no such luck. She had to go outside, so Mom went with her. That got Poppy and me up, so we ALL made a trip to the backyard. Mom went back to bed until 5:00 and then we all went outside again. This time, Mom was trying to get Patches to do poopies, so she was going to go down the stairs and walk around the yard with her. Unfortunately, Mom slipped on the stairs and hurt her left leg and her right arm. She caught herself by grabbing the railing with her right hand, but her feet didn't stop and she pulled muscles in her arm and her leg. Her butt hit a bunch of stairs, but that won't be a problem since she has lots of padding to cushion the fall! 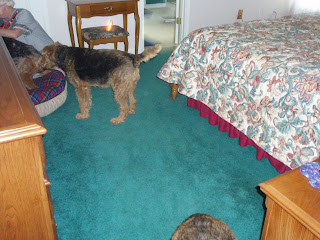 This is a picture of Mom and Poppy trying to show Patches her new bed. It matches mine and I think she will really like it once she gets used to it. Poppy's doesn't match anymore. Mom originally bought 2 ginormous beds that looked like Ralph Lauren fabric. That was fine when there was just me and Queen Pockets. She went back and bought 2 more in a plaid fabric and they have been stored in a closet for several years. A couple years ago, I had a problem with peeing excessively and I sort of, accidentally, ruined the smaller of the 2 original beds. It went in the trash, so now we have 2 beds of one fabric and one of a different one. That's okay since Poppy likes to be different anyhow! Poppy looks very fat, in this picture, but she says she's only fluffy. She will be getting an Aire-cut on Saturday and then we will find out for sure whether it's all Aire-hair of if she's getting kind of porky! 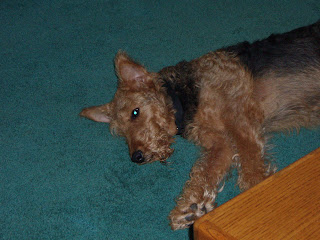 Since we got home from the wheelie skating party, we have been doing lots of THIS! I think we may have over dosed on ice cream on Aire-Ruby. Lacie was feeding milkshakes to Patches and somehow it got out of hand. The blender 'sploded and a bunch of us doggies were covered in ice cream. It sure was fun to clean up. We hope we didn't leave too big of a mess on Ruby's plane!
Patches wants to thank everyone who wished her a happy birfday! Maggie and Mitch sent her a beautimous e-card that we will post as soon as our mom is feeling better. She was sick all day, yesterday and now, not only is she still sick, but she thinks rigor mortis is setting into her arm and leg.
We signed up for the International Package Exchange and we will be sending a box of goodies to Koobuss the Wire Fox Terrier. Pedro will be sending something to us! This is going to be a whole lot of fun! We need to send a big thank you to Chef and Mr. T-Bone Beasley and their moms for organizing the whole thing. We know it was a lot of work!

Aire-hugs to everyone!
Penny and Mini Patches

Posted by Princess Patches at 6:28 AM

Oh! I hope your mom is feeling better and I hope she doesn't turn too many colors after her fall!! Ouch :(

I hope you mum is okay and not too sore over the next few days.

hi kiddos, there sure is a lot going on around your house these days. your mom is amazingly talented to make mini-Patches. she is very cool. and your mom is a good sport to get up in the middle of the night to get you out for your potty breaks. we hope she's gonna recover from her fall down the stairs - ouch!

we're glad to hear that everydog is doing okay.

That's awesome that you're a free-range doggie already, Patches! You must be doing fabulously to get that honor! Good for you! The mini-Patches is just adorable!
We hope your mom is feeling less stiff at this point! Slipping when you're not expecting it is no fun!

Hello Penny, Poppy and Patches...me and Muzzer are trying to catchup on bloggie friends, and we are so happy to read the story about Patches and are glad she has joined your perfect partnership!

Oh my, oh my, oh my! we no has visited your bloggy for a week or so and look what happened! We be so excited and so happy about Patches! She has the best new home, what a lucky girl!

Hallo Aire-wheelie! The best thing about us Wheelies? We don;t pee!

Hi, friends!
Sure I hope your mom feels better soon!
Give her kisses and hugs from us, ok?
Lorenza

Mumsie sez to tell her that her nocturnal exploits remind her of Stan when we first got him...he would dive on her at 3AM...she'd get up, we'd all wake up and it was a PAWTY!!! That phase didn't last long; Mumsie doesn't do well sleep deprived. One night she thought Stan was fakin' bout going out and when he PEED RUNNING all over the carpet, she plunked him in a crate. He carried on for two or three nights...she got up every two hours, ignored us, and that was that....

Now the big marshmallow sleeps all nite long in his cratie and the carpets smell lots better....

Kisses to you and all the Wheelies!!!

Crikey we sure hope your mum didn't hurt herself too badly. Poor thing.
Patches sounds like she's coming along in leaps and bounds...good stuff maties!!!

Woos airefriends,
that wheelie-mini Patches is very cool! Woo must have a clever human.

Your mom made mini Patches herself? That's so pawsome. I hope your mom is ok and the stars at her butt disappear soon.

All these wheelies are SOOO making my Sibe head spin!

Sounds as though Princess Patches is settling in really well, that's great. Sad to hear about your Mum falling again, that's not nice, Hope she feels better soon.