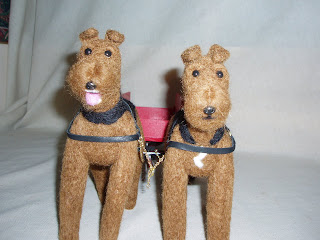 Hi everybuddy! It's Bess and Bill! We were put up for auction, this morning on that Ebay kennel. 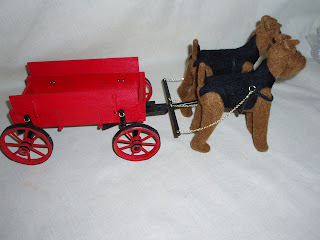 We are pulling a farm wagon that the 3 P's dogdad built. It took him a veeeeeery long time to build it because he tried to make it as authentic as possible. Our creator thinks we should fill the wagon with snow and Christmas presents. Maybe our new furever pawrents will do that! 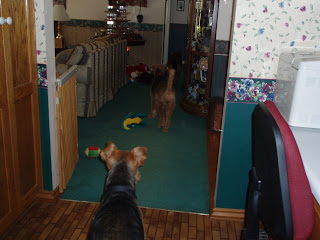 The 3 P's are having a very lazy day today. It's raining, the wind is blowing very hard and it's kind of cold outside. Every time they have to go outside, they stand at the top of the steps until Mom or Dad MAKE them go down the stairs. I guess they don't want to get their tender feets wet. 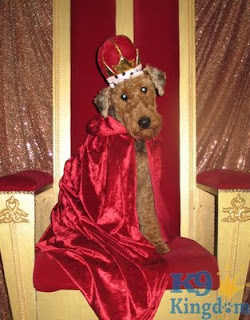 We are asking everyone to vote for BabyStan so he can be the cover boy for the K9 Kingdom. Isn't he cute? He will make a great king! You can vote for him at: http://www.myk9kingdom.com/photo-contest-2008.php So far, he's waaaaaay ahead of everydog else and we hope he stays that way!
Patches got in big trouble yesterday and again this morning. Yesterday, Mom took out some potatoes to peel for supper, but she dropped one of them on the floor. No sooner than it hit the floor, Patches ran over and grabbed it. She ran to the big bed, with it and ran around on it with the potato in her mouth. She acted like she just won the lottery! By the time Mom pried it out of her jaws of death, it was full of holes. She didn't eat any of it, but there were lots of puncture marks on it. Then, this morning, Mom put a piece of crumpled up tissue paper in the trash can under the computer. A few minutes later, Poppy dragged it out and then Patches nabbed it and took off for the bed again. I don't know what it is about her and that bed! She seems to take everything up there! Well, Mom tried to grab her everytime Patches came close enough, but it took several tries before she finally got a hold of her. That Patches is one quick doggie! Mom finally extricated most of the tissue paper from her jaws of death, but we think she swallowed one tiny piece.
That's all for today, folks! We are off to sit on a shelf and hope for a new furever home!
Aire-hugs,
Bess & Bill (oh, yeah...and Poppy, Penny & Patches too)

Posted by Princess Patches at 11:16 AM

I don't know what it is about tissue paper in a trash can....actually lots of things in trash cans. It is kind of irresistable. As for the potato, well, you did put it on the ground...
Gorgeous felties and wagon!
Hugs
Sunny

That's one spiffy wagon yer ridin' in....we wish we could ride along with ya fer sure....yer Dad is really talented makin' such a wonderful ride fer ya....FOREVER HOME>>>>HERE YA COME......

As fer Patches....she's catchin' up on all the puppy stuff she missed as a mistreated dog before ya rescued 'er and she got ta live in such a nice home.....she'll be fine....'n if ya get ta be faster so will ya.....

Hi, Bess and Bill!
I am sure you will find a lovely forever home!
Looks like the excitment never ends with Patches, right??
Kisses and hugs
Lorenza

What a awesome team of Dales you are, Bess and Bill! That is one spiffy wagon! Your mom is a master at needlefelting! We hope you find your forever home real soon!
Tell Patches that paper towels and kleenex and toilet paper are much tastier than tissue paper!

We hope you find your new furever homes soon Bess & Bill.
As for Patches, she sure is super quick and never lets an opportunity go by lol.

That is a great red wagon. Good job dad. Patches, it's a good thing you didn't eat the potato coz I read somewhere that raw potatoes are not good for dogs. Dunno if that's true but better safe than sorry!

What a fabulous job on the wagon and on bess and bill. Patches rocks, we commend her terrier skills!!

Patches is kind of goofy taking everything on to the big bed. Sounds like she is trying to give your mom some exercise.

Those draft dog airedales are cool. Hope they find a good home.

Great work with the potato and tissue paper!

Now when you're really good (like Persephone), you'll be able to autodial the cell phone in your mouth so that your human can hear you destroy it from twenty miles away!

Boy if Patches and ARchie teamed up together..the world would be theirs! Love A+A

Boy if Patches and ARchie teamed up together..the world would be theirs! Love A+A

I like the red wagon, a red sleigh would be nice at Xmas too! Patches, I never tried a raw potato before. Was it any good? If you look at my post today you can see me and Ziggy and Libby doing some professional begging!

Patches sounds just like Callie. She is always jacking stuff and running off with it. Being deaf she doesn't listen when Mom yells at her.. She seems to turn her head so she can't see moms signals either. She is one smart heeler..

Oh I do love an unattended trash can! You never know what kind of treasures you might find!

My human gets a soda can with 13 pennies and shakes it hard at me when I have "undesireable" behaviors...and I stop as soon as I hear that can.

I hate it, but the human swears by it!

Hehehehe! Hope the weather gets nicer for you soon! It's still warm here in AZ!

You guys are very cute.
My mom had a dog when she was younger that would take stuff to the big bed, too. She wouldn't chew anything up, just take it there and leave it.
Kaos

We hope you find a wonderful forever home. You both are such cuties!

Patches sounds like my kind of dog! I never thought of playing keep-away with a potato! I'll give it a go!

What a totally cool wagon! We think it would look amazin' with some Christmas pressies in it too!!

Are you girlies havin' fun in London? Um...you certainly seem to be enjoyin' my new Dale Smoothies...I've never heard the three of you giggle so hard!