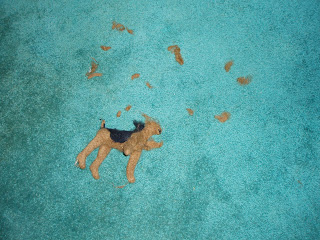 Happy wheelie Wednesday, everybuddy! My name is Rudolph the non-wheelie! I get to do the post today because I have just come out of a very loooooong reconstructive surgery! I was created to pull a sleigh with a couple of other Aire-pups in it, but it seems that somedogs had other ideas for me. This is what our mom found right after Poppy and Patches were acting all crazy in the living room. She isn't sure which doggie is guilty, so she's blaming both of them. The only thing she knows, for sure, it that Penny wasn't involved. Those wild doggies ate off my ears, my tail, my piddler and part of my black saddle! I didn't have eyes or a nose, yet, so they didn't get those! It's a good thing Mom found me when she did or the carnage would have been even worse! 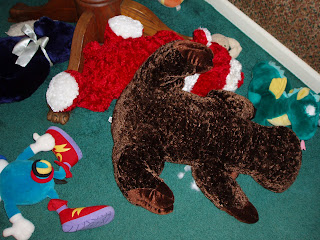 As most of you know, last Friday was Poppy's barkday. Well, our pawrents gave the girls three new stuffies...the brown moose, the red dog and the blue teddy bear. Well, already, they have had eye-ectomies and nose-ectomies and some of them are losing their stuffing. This time, Mom KNOWS who the guilty party is...it's Patches! The same doggie that didn't want anything to do with stuffies when she first entered the witness protection program! Well...now she can't get enough of them! 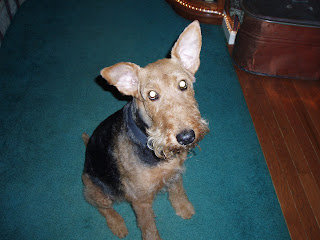 Poppy is all excited because Mom and Dad went to PetCo, yesterday and spent lots of their yard sale money on us! They didn't make a whole lot of money, but they got rid of a whole lot of stuff! You see, our pawrents go and buy stuff, at yard sales and then sell it on Ebay. Even though they have been doing this for several years and you would think they would know what sells and what doesn't, they still make a lot of mistakes. Everything that doesn't sell on Ebay, goes into our next yard sale. Everyone always says we have the best yard sale in the neighborhood. Well, if that's true...why don't they buy more stuff from us? Every year, on December 31, our pawrents load up the Aire-mobile and take loads of stuff to the Goodwill. 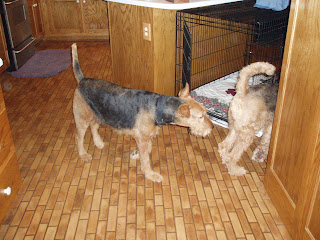 Our mom is thinking about dismanteling Patches' crate and storing it in the basement. She decided to leave it in the kitchen until after Patches recovered from her fix-it surgery, but now that she's all better, Mom is thinking, once again of putting it in the basement. The problem is...that Patches still goes in there every night when we all go to bed. Mom would like to put the bar stools back that belong there, but she can't with the big honking crate in the way. Now, our mom is thinking about leaving the quilt there and taking away the crate. I guess maybe she will think about it some more! 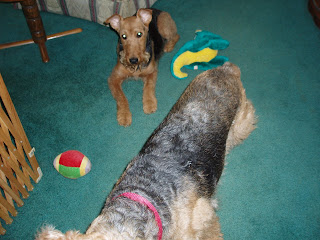 Remember our Bluebirds? Well, yesterday, they stopped by to say Hello! We saw them on the deck so Dad hurried up and put meal worms out for them. Well...when he opened the door, they flew away and haven't come back! We put the meal worms out, again, this morning, so we are hoping they come back for a little snack!
Well, furry friends, after 3 1/2 hours of surgery, I'm back to my normal self, but I'm very sleepy. I'm off to have a nap in a very safe place away from the jaws of death!
Aire-hugs,
Rudolph (and those other 3 P's too)

Posted by Princess Patches at 8:02 AM

OOHHH Rudolph. Let me tell you that you are really in the right hands with your doctor! She fixed my grandmas wheelies Paco and Piere up really good. That is after my mommy Apache tried to murder them. You got off luckier than they did my friend. Happy healing.
Malitta

I am sorry to hear of your traumatic episode, but happy to hear you are recovering!

Thanks for the update too :-)

You must be bionic now! You'll be able to pull that sleigh faster, longer and with more power then ever before. Maybe you'll get your own tv show where all your super bionic stunts will be shown in slow motion!

pee ess - Tell you repair person that the gates at the estate where Chip the chicken went to live are in fact electronic!

Oh no! That had to be a horrible experience! I hope your recovery time is quick.
Kaos

Rudolf, when ya live with dogs, carnage and destruction happen all the time! Feel better soon.

Dang rudolph, that is some survivor story. You could be on the discovery channel or something. Maybe just try taking the crate away for one night, see what happens and go from there. Maybe she will find someplace else she likes to go just as much?

We're so glad you had your surgery now, Rudolph, so that you can pull that sleigh when it snows! I hope we get to see a picture of that!

Hello, Rudolph! We're so glad you're better--that picture is a little disturbing! We hope the whole experience wasn't too painful!

And belated Happy Barkday to Poppy!!! Sorry we haven't visited in a while, but we're so happy to see your beautiful faces again!

Hi, Rudolph!
I guess now you will get an extreme makeover!
Kisses and hugs
Lorenza

OMdoG!! Poor Rudolph!! I hope the surgeon manages to put you back together... It must've been so traumatic.

Oh Poppy we missed your birthday, we are so sorry. Hope you had a wonderful day.

Oh Poppy we missed your birthday, we are so sorry. Hope you had a wonderful day.

Oh Rudolph.....ya sure were in need of emergency surgery fer sure....ya think Patches had somethin' ta do with yer carnage?

Well, yer all better now 'n we hope ya stay that way.

Everytime I visit I ferget ta tell ya how much I love yer ceramic floor that looks like bricks....almost fergot this time too...ya would think I was gettin' ta be a senile as Gram.....'n no one can be that senile and be still walkin' around.....

We heard that eBay is havin' a bit of trouble lately...layin' lots of people off 'n stuff....maybe the non-buyin' public are stayin' away from online buyin' too...

Hope ya don't have trouble findin' a new home, Rudolph, with a winnin' eBay.er.....

Wow, now that was some amazing story on yer beautiful floor...we can see that ya aren't afraid of hard work....no siree...now that was a job well done....absolutely super, yeppers !!!!

Oh dear poor Rudolph.
I am sure those cheeky Dales never meant you any harm.
Glad you are all fixed up again.
Stay safe now.

Pee-wee still goes in his bunker even though he's a big boy now. We try to think of it as a piece of furniture.

Given that there were no witnesses to the pre-wheelie attack, its possible that the aire-gals were just defending themselves. Those creatures can be quite aggressive sometimes.

Oh, my gush, you poor thing. I hope you got put back together okay and are feeling better now. Doggies can be so mean. I like your folks' December 31th tradition. I may have to borrow it.