Still too sad to blog! 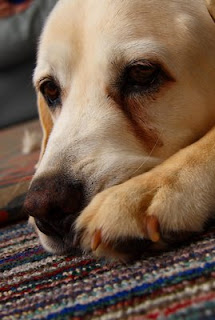 Hi everybuddy, it's me, Patches! Yeah, we know it's been a week since we've blogged! We are still too sad about our buddy, Charlie, going to the Rainbow Bridge! He has always been the #1 doggie on Dogs with Blogs, which is only fair since he and his sister Opy and their pawrents started the whole thing! We are really going to miss the big Labradoro Bionico! For any of you who didn't know Charlie, he was a big Labradude with a pacemaker. Hence the name Labradoro Bionico or bionic Labrador! We are keeping all our paws crossed for Brooke, Greg and Opy (the Gruff Puppy)! We know it takes a looooong time for the hurt to ease up, but we also know that they gave Charlie the best life a pup could ever have. Run free, sweet Charlie, until we meet again when we all get to the bridge. 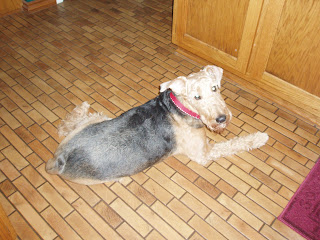 Just wanted to let you all know that my mom finally finished my Aire-cut. Well, as much as she's going to do. She didn't cut me real, real short because she likes to see me kind of curly. Okay, that's what SHE said! I think it's because she doesn't have nearly as much energy as I have, so she quit. She says I look like a teddy bear! I don't know about THAT, but she keeps saying that I'm too cute for my own good. Whatever THAT means!
Poppy and Penny will be getting their turn on the grooming table sometime later in the week. Mom has to have some help from Aunt Wendy to get them up on the table. Unlike me, they don't want to go up the steps. Maybe it's because the steps look like they lead to NO WHERE! Anyway, Mom says the table is at the pawfect height for her. She's kind of short, so it works out well! She also said the clippers are really great. They didn't even get too hot even though all my wiggling made it take longer than it should have!
Aire-hugs,
Patches (and Poppy & Penny too)

Posted by Princess Patches at 2:47 PM

I am so sorry! I know you all miss Charlie so much! It's so hard to say goodbye to those we love!!

What a nice tribute, guys! Charlie will always be number one!
We think your mom did a wonderful grooming job on you, Patches!

Hi, friends!
Yes, Charlie was and always will be # 1!
Kisses and hugs
Lorenza

Mom will nevfur furget the tears of disbelief when we saw Brooke's message on FB furry soon after she posted it...

The weekend was a blur...a bleary blur!

You are looking very slinky, too! She did a great job with your Airecut.

It was so sad to see that Charlie is gone. We have all lost a wonderful friend.

Your Mom did a great job on your airecut. That is a sweet photo of you there.

Charlie will be in our hearts forever ....
Kisses, Faya

The sadness will be be replaced by sweet memories eventually. Just takes time. We like the Aire-cut, by the way- curls are popular around here too! Take care!

We didn't get to know Charlie, but we will always credit him and Opy for all our friends at DWB! So sad for all of us to lose him. Sounds like he had great life, though, with the best of care.

Speaking of, you guys get great c-Aire, too! Super 'do, girl!

We never knew Charlie, but we are so thankful for DWB.

Aren't good clippers wonderful? Our Mom started with some Wahl clippers that cut slow and uneven. Now she has upgraded to Andis and they make all the difference in the world.

We are all so sad about Charlie, but life goes on and it is good to see your fuzzy face.

We get the same kind of comments here,

"You're lucky you're good looking." Or
"You are just too cute for words."

Your Mum made a good job of grooming you Patches. Our Mum is 'working up' to doing it herself too. Dad has just shortened the legs on the grooming table 'cuz she's only 5 foot tall and we were towering over her.
It's my turn first, NOOOOO!
Nibbles
Nelly xx

Nice of you to drop by my smelly blogplace, dooogs...yeah, a Charlie-less world is a little the worse off.

Nice hairdo, you wouldn't catch me hanging round my ma if she had a pair of clippers in her hands!

That was a lovely tribute Patches.

Your Mom is right Patches you do look like a teddy. Cute and good for a quick cuddle!!

We were very saddened by the news too. He was one of my earliest blogging friends. He will be missed by many.

Smoochies,
The Solid Gold Dancer is BACK home!

We will never forget Charlie The Big Dog. Mum was with Brooke when Charlie crossed the bridge and speaks to Brooke every couple of days, just to make sure she is doing ok. It has been very rough for Brooke, Greg and Opy too.
Many tears have fallen.
Good work on getting your Airecut finished - you look beautiful.
Love Baz and Ellie

I hope you are feeling better soon. Take all the time you need.

P.P.P
Patches I think the slight curl is sexy. Great pose to show it off. The over the shoulder pose is just perfect.
norwood

Why do moms make such a fuss about grooming? Lots of fuzz, lots of dirt--it's protection!
Miro

Nice post as for me. I'd like to read a bit more about this topic. Thank you for sharing that info.

It is very interesting for me to read this blog. Thanx for it. I like such themes and anything connected to this matter. I would like to read more soon.