Hello to all our furry and not so furry friends! It's me, Patches! Before I show you my new Aire-cut, I wanted to show you the Black Bottom pies that our mom made for our dad's birthday. It took her a little over 3 hours to make 2 pies. She says that now she knows why she hasn't made any in about 25 years! When she was making the pies, she had the rum bottle out and we were watching her to make sure she didn't sample any of it. She didn't. YET! Our dad's birthday is Sunday, October 18, but she made the pies early because she won't have time the rest of the week. She tried to keep it a secret from him, but he found the bag of Ginger snaps that became the crust. It's also hard to keep that kind of secret since Dad spends all his time in the kitchen and that's where the pie making had to happen! 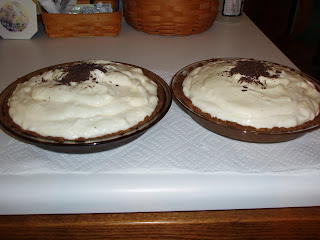 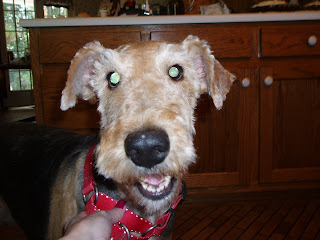 Now that you've seen the pies that we aren't allow to have, this is the new ME! Yep, I've been shorn like a sheepie. My hairs were so long and curly that Mom and Aunt Wendy shaved me. Before they did my Aire-cut, my mom held me and Aunt Wendy cut my toenails. First, Mom put a muzzle on me because they wanted to keep all their fingers. Then I went into my best drama queen act! We were in the basement and our dad could hear me all the way upstairs. He thought they were absolutely KILLING me! Well, they weren't, but I sure made it sound like they were. Mom started to get worried that the neighbors might call the ASPCA! It sounded like I was being tortured! Oh yeah, and remember that wonderful place where we went to get our toenails cut for just $5 per dog? Well, it turns out that all they cut were the TIPS! Our mom was NOT amused! At that rate, we would need toenail trims about once a WEEK! 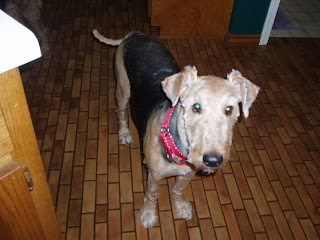 Look how skinny I am! Okay, maybe I'm not REALLY skinny! Mom says I kind of look like a Kirby vacuum cleaner with toothpicks for leggies. I've actually lost a couple of pounds, but it's hard to tell. 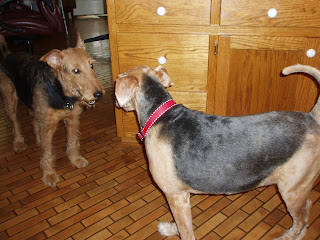 Poppy is trying to get me to play bitey face, but it's hard to concentrate with those two pies on the counter right above us. Right after Mom took this picture, I showed Poppy how aerodynamic I am, now, by chasing her all over the house! 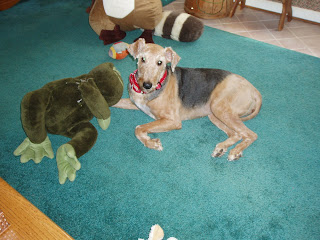 I bet you thought my 'splodin' froggie was gone. Nope! Mom let's me keep him 'cause he's my favorite stuffie. I'm concentrating really hard on growing some furs so I will be beautiful when we go to the Aire Care Fair in November. We are going to have soooooo much fun! We are hoping to get to meet Janie and Hollie and Mack and Sally Ann and their peeps. Our mom is donating some Airedale felties and they are going to have a silent auction for them. There will be lots of cool doggies things that peoples can buy or bid on. We don't know all the details yet, but we do know that ALL the money goes to the Airedale Rescue Group. We sure hope they get lots of moneys for ARG! That's where Janie and I both came from!
Poppy had a really great 9th barkday (again)! We have some pictures, but they will have to wait till another post. Aunt Wendy brought Poppy some really yummy cookies and she had to share!
Well, everydoggie, we're off to bark at the hospice person that is coming to our house any minute now!
Aire-hugs,
Patches (and Poppy & Penny too)

Posted by Princess Patches at 12:17 PM

Patches,
I think you look just beautiful! I'm in dire need of an aire-cut and have a feeling I'll be going to the beauty shop before the aire care event. I am so excited about meeting you and your mom! Mama was hoping your mom would make some felties!!! We are very excited!!
Love,
Janie

I think I heard woo up here in Pawsylvania whilst I was out waiting fur my snow!

Patches! You are nekked! They even shaved your tail. At least it makes you speedier for bitey face action, but watch out because your thick furs also protected you from the jaws of death Poppy mouth.

Your mom is super brave to spend all that time in the kitchen and make the most yummers pies. Dad can just pretend he didn't see it happening.

Lucky Dad to have such wonderful pies! And you do look very cute- even if you are a bit nekked! It happens to the best of us!

Those pies sure do look yummy!!!

Our Dogdad likes to smooth all our facial fur with his hand and then tell us what pointy snouts we have. Kind of like the way you look, right?

But it will grow back. Soon!!!

In the meantime, enjoy that aerodynamic feeling.

Happy birthday to your Dad. We hope he's doing OK and send him wirey sniffs and snorkles!!!

w00fs, yummmmie, those pies looks delishhhh..and u still look bute ti ful in ur new hairdo...how iz ur daddy doing, me and mama still got him and ur family in out thoughts and prayers..

b safe,
~rocky and mama~

Yum! Can we come eat black bottomed pies with you???? Graham cracker crust? With rum? YUM!!! (We have to believe Moma... we've never tasted either!)

It's not funny, but we had to chuckle when you described your toenail torture. Take away the vocals, and you'd be describing Fergi! She is one strong drama queen!!

We loved reading about the upcoming benefit for the Airedale Rescue Group! It's a great cause AND you'll get to see some friends!

We're hoping your Dad has a good birthday, and we're keeping your family in our thoughts and prayers...
Love
Jake and Fergi xxoo

What a great Airecut, Patches! You look so sleek and cool!
And we LOVE the look of those pies! yummmmmmmmmmmmmm

We think you look lovely!! ANd so do the pies!! Your Dad will love them..love A+A

Hi, Patches!
You look beautiful!!
My mom had a good laugh reading about the whole "screaming" episode!
The pies look delicious! I am sure they are!
Kisses and hugs
Lorenza

WE WANT PIE! I read the post but kept going back to the pies - even had some drool on the keyboard. Sorry they shaved you - but you have less fur to slow you down chasing Poppy.

i don't know what looks better, the pies or you!!

You look great! As do those pies! YUM

We think Mom and your auntie did a great job, you look great to us. And those pies - yummers - they look sooooooooo good -bet your Dad loves them. Happy birthday to him from us - please give him some sloppy kisses from us.

Those pies look so good. Mommy and I were both drooling. Your haircut is nice too; Mommy and Daddy have been trimming my distant cousin Mariah - she has a really long soft coat.
Hugs, Miley

We are back! Véronique is sorry to have neglected you. But we are back! We are going to come to read to you more often....
I missed you so much...
Kisses, Faya & Dyos

Yummers.. those pies look delicous! Happy Birthday day! I was quite surprised to see your super sized froggie still around. I'm glad I get to see some frogs until spring rolls around. THat Aire Care Fair sound like so much fun.. I wonder if I could pass an airedale.
norwood

Oh my, you're going to have a hard time dribbling water on the floor without a luxurious beard!
Miro the slob
& Alanis the dainty

Oh Patches...you look pawsitively sleek in that new airecut...Stanley got one too last week, but he's not as short cuz it's gonna stay cold here for a while now and he said he'd freeze...

He screams like a girl when he gets his nails cut...it's uggleeeeeee...Mumsie won't do it cuz Daddy won't hold him for the "torture" as he calls it so he has to go to the groomer to do it...sheesh...Mumsie can do my teeny nails on three seconds...and they dig just as well as Stanley's...maybe better...I can get into really small corners to look for mousers...

Happiest Barkday to your Dad and we hope you patient Dales got a hooge piece of one of those pies...

Lotsa love to you and ur peeps...

Hey, Love the new hair cut!! Mom shaved abbey once Too funny!!! Abbey was so embarrased at first. But later on she realized that it felt good.

We like the idea of a 'splodin' froggie on principle! We have "detonating ducks" and "imploding elephants."

Hi, P Girlz! Sorry we haven't been around in a while. You're still looking as fine as ever. :) Patches, we love the aerodynamic look! And, Poppy, belated Happy Barkday!!! Belated Happy Birthday to your dad, too. We're sorry to read he hasn't been well--we hope he's feeling better. We're sure you guys are a great help to him!

Paws crossed you get loads of dosh for your aire group and the felties make ooodels on money - they should I know they will be pawsome.

Now I need to go and google Black bottom pies...yummm very interesting. Hope you got a huge slice with some ice cream.

Hi Patches.....ya do look a bit shorn...like a sheep after it lost all of it's wool...but the nice part is that it grows back....sometimes faster than ya want it to.

We sure hope yer Dad enjoyed his birthday pies...they sure look delicious....hope all is well in yer world too....

Hi Patches,
We are in the same boat!! I am also trying to grow out my fur cos I am pretty nekkid now.

We hope your dad had a wonderful birthday.. those pies look really good. Your mom must have put in so much effort. :)