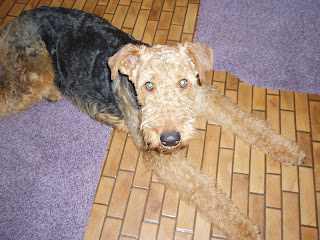 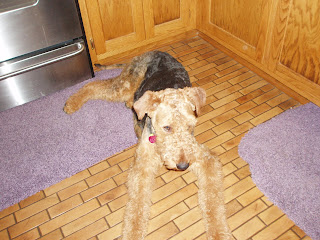 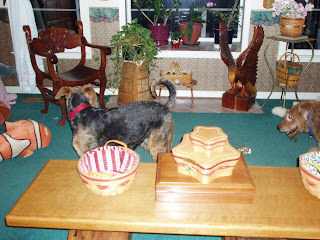 Hi everydog, kitty, hammie and hooman! Our new little brother is HERE! Our mom and Aunt Wendy went and got him, yesterday, from some place called Marietta. He had been transported by Airedale Rescue, yesterday, from South Carolina. He came to us with the name of Mick, but as you know, all our names need to start with a P. Mom wanted to call him Peetie like the dog that used to be on the Little Rascals, but Aunt Wendy didn't like that name. Aunt Wendy like the name Piper, but our dad kept calling him Pepper. Finally, last night, Mom made a decision and Dad agreed. His name is Captain High Pockets and we will call him Pockets. This is a tribute to Mom and Dad's very first Airedale who was named Pockets and it is also a reference to his height. He is WAY taller than either of us! His nose is at the perfect height for counter surfing and so far, he is doing a FINE job of it!
I, Poppy had a really big day, yesterday! First, Ezzy Rider came to visit and then Aunt Wendy gave me a much needed Aire-cut and a b-a-t-h! I wasn't too excited about either the Aire-cut or the bath, but I was a good girl anyway. Ezzy Rider stayed here with us while Mom and Aunt Wendy went to get Pockets. He fell asleep on Dad's lap and played with both of us. We were having a pawsome time until they came back with that giant baby brother for us. We welcomed him into our territory, but we remained somewhat cautious since he is so much bigger than we are and he sure is wiggly! He eats a ton and drinks water by the gallons! We think he is going to turn out to be a perfect Aire-boy, but right now, he is driving us crazy! He has played with almost every toy we own and he's had his big Aire-lips on practically everything in our house. Mom and Dad had forgotten how it is when you have to watch somedog constantly! It's coming back to them very quickly, though!
Pockets has the most bootiful eyes...they almost look like human eyes! If you click on the pictures of him, you can see his eyes up close. Also, he hasn't had his tail docked like we have so it is a lethal weapon. A lot of our European Aire-buddies have long tails like that since it is illegal to dock Airedale's tails anymore, over there. Some people think we should have it docked, but the jury is still out on that! We will make that decision later. I, Poppy had my tail docked one joint too long and, at first, Mom wanted to have it fixed, but it became part of my personality and they never had it done. We will have to see if Pockets' long tail causes any trouble before the decision is made.
Until next time...
Aire-hugs,
Poppy & Penny (the confused Aire-girls) & Pockets (the wild child!)
Posted by Princess Patches at 6:39 AM

Congratulations to all of you! Pockets is a beautiful boy and he has lovely eyes like Mitch does! We totally understand about those Aire-lips on everything in site! We can't wait to read more of his daily adventures at your house!
BTW, we just LOVE his name!

Congratulations, he is just gorgeous and we love the name. He seems to be a very big boy, how old is he?

Congratulations on your new (big) brother. I love his tail! I hope he settles in OK and treats you gals right.

thanks for stopping by, Penny, Poppy and Pockets! I do like that name, Pockets. I look forward to reading more about you guys! I too am a rescue, I live in Georgia AND a terrier! I keep my humans on their toes!

WHOA!!!!!!!!!!!!!!!!!!! What a big handsome Dale!!!!! We are sooooo excited for you and ur peeps...welcome to the world of THREE terriers...and you stole ur wheeled stuffie's name...when you call P O C K E T!!! ur gonna get one crazy dale and another tryin' to wheel himself outta ur china cabinet!
Babystan drank SOOOOOOOOO much water when he first got here...it looked like one of the Pittsburgh rivers in the laundry room....he's probably a little nervous with you two divas around!
Ya mom now has 12 feet to wipe...is your Georgia clay red? Outta be very entertaining. We keep a bucket of wet washrags in the garage on muddy days...drives Mumsie nuts!
Peemail us at kreitm@gmail.com ...we wanna get ur address so we can send something for the big baby...how old is he anyway and how much does porkchop weigh???

Lacie
Pee Ess/ Does he date?

Welcome To The Life Of Ezzy Rider And Jagger said...

sarethebestHi, Aunt Wendy here..I must say that Pockets has the most beautiful eyes and I know one day he will be the perfect Airedale!!!!
Jag is looking forward to meeting him. Ezzy talked about Pockets all night. Ezzy said he runs like the wind and can counter surf with the best! Good Luck Lana and Stan! Poppy and Penny, we always will have a room for you if you need a vacation.

Congratulations to you. Nice to meet you Pockets.
Deetzy

Congwatulations Penny and Poppy
What a jpyful house with all you aiwekids!!!
Youw new bwuddew Pockets looks vewy handsome.I like his whiwly tail..it's like Faya's ..I hope you bond and get to have the best ime with him evew!
smoochie kisses
Asta

Congrats on the new family member!! I'm sure once the newness of the new home and family wears out.
Kaos

G'day Pockets,
Noah here. It's good to meet you matie. Let me know if you need advice dealing with 2 sissys as I have 3 and am somewhat of an expert.

Oh Pockets is just too cute!! You must be such proud big sisters. Don't let him push you around too much. There's only so much he should be able to get away with. Good luck, can't wait to see what all three of you do! Congratulations!!

WOW Congratulations on your growing Dale family!!!! Pockets looks like a handsome guy...

Big Aire Kisses to you all!

Yay! Congratulations to your family! I think Pockets is a great name and a wonderful tribute. Now your family is like one of those tongue twisters...Penny Poppy Pockets Peter Piper picked a...
So exciting!
Your friend, Lenny

Wheee, welcome Pockets! What a big handsome boy you be! Me hopes Poppy and Penny not being bossy girls (me be bossy girl to big Harry, tee hee!). Me looks forward to hearing more about you.

Another 3 and you will be the same as us!lol

We hope you will have lots of fun and games together. Looking forward to lots of piccies.

p.s. 5 of us have docked tails but its not through choice. We vote Pockets keeps his tail!

Congratulations on your new Airebro! Pockets is a good looking boy, and you know, he'll come in handy when those counters and tables need surfing.

My girl thinks Pockets looks a little like I did before she adopted me through Airedale Rescue! Does he have really thick eyeliner... like a goth Airedale? If so, we could be brothers!

How old is he & when's his birthday? (Basically I want to know when you get more treats).

Pee Ess
Happy Happy birthday Penny Girl! I'm so sorry I haven't been around lately, but I want you to feel the goober LOVE!

Pockets sounds like a whole heap of fun! It's very handy that he can counter surf so easily! Can't wait to read more about all your adventures! J x