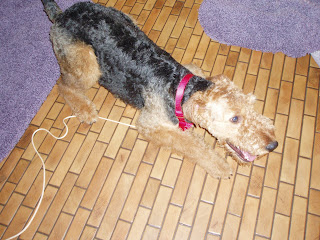 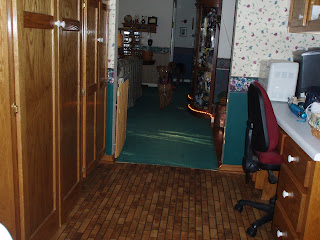 Hi everydog, kitty, hammie and hooman! Our wild brother, Pockets, is now sporting about a 6 foot long rope so Mom and Dad can step on it and catch the crazy critter when he refuses to come. Since he has already shortened his rope from the 8 feet he started with, it has now been soaked in hot sauce. That stops him from chewing it for several hours, but then, it has to have more put on it. He either decides that he likes to have a really hot tongue or the stuff wears off. If you click on the second picture, you can see the wild-eyed look he gets when he gets a taste of the hot sauce. Sorry it's so dark!

I, Poppy am still limping and the big boy is to blame. He t-bones me and knocks me off balance. My petite 46 pounds are no match for his 65+ pounds and his 34 inch height. I have sunk my teefies into him more than once, but he just comes back for more! When he went for a bath, on Saturday, Penny and I thought he had finally left for good. No such luck, he came back home a few hours later. *Sigh*! He IS fun to play with when we feel like it! We just wish he would settle down a little!

Yesterday, Aunt Wendy came over to give Pockets his first real training session. He attacked and jumped all over her when she came through the door so Mom grabbed him by the collar and tried to get him settled down. That was a big mistake! Mom ended up being slammed to the wooden floor in the kitchen and now she is hurting all over! Beastie boy grabbed a packet of Kleenex from Aunt Wendy and she had to pry it out of his jaws of death. Funny thing though...once he got his prong collar on, he was the perfect boy! He walked nicely, sat on command and paid no attention to stuff when told to "leave it". They even took the big doofus for a walk around the neighborhood and he was really good. However, as soon as Aunt Wendy went home to Ezzy and Jagger, the wild boy was back! He ran through the living room and knocked over a lamp and almost knocked over an end table with a glass top! Mom was able to grab the end table before it hit the floor! He had to go in his crate after that little escapade so Penny and I sat outside his crate and snickered at him! 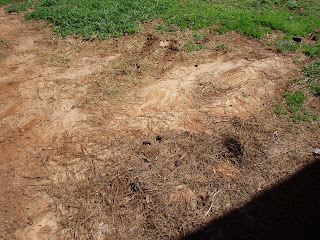 See that patch of mud? If you click on it, you can see large 'dale toenail marks in it! That is from when Pockets kicks his back legs every time he does poopies. Mom calls them "burn outs". He does it EVERY time he finishes his poopies. The really bad thing is that he brings the mud inside under his toenails and even worse...he kicks the poopies about 6 feet behind himself so some of that comes in too! We sure are glad Penny and I don't do that! Mom doesn't even want to think about what it would be like with all 3 of us dragging mud and poopies into the house!

We should have the fence up by Wednesday or Thursday so beastie boy will be able to run off some of his energy. Maybe, then, he will be nicer and a little more gentle with the bitey-face stuff. We like playing bitey-face with him, but he's just a little too rough! Right now, he's in his crate again because he was trying to eat the computer cords under Mom's desk! We aren't sure, but we think he might be "possessed"! Of course, Mom thought Penny and I were, too, when we first came to live here, but we finally outgrew it! I wonder how long it is going take for the wild child to outgrow it! And we wonder if Mom and Dad will live through it!

Posted by Princess Patches at 9:11 AM

He's truly living up to his Airedale Terror breed, isn't he! Our paws are crossed that the fence is a MAJOR help!

Ah, Pockets reminds me of a younger version of myself. It's great to be an Airedale pup! I think the fence will be great for him. I was much calmer when I got to spend some of my energy! Keep up the patience girls, you may need it for awhile!!

woofies Poppy, Penny and da wild child...heehee wowzers dat Pockets iz into everfing....heehee, how dose he git so much energy. good fing u iz gettin a fence so he can run...

Gosh you guys sure have your work cut out for you with Pockets on the loose. Lets hope he settles down once he has a good area to run around in.
Good luck and in the mean time lay low lol.

Um...well...we are gettin' our terrier belly muscles exercised by your bloggie...as I type this Mumsie is crawlin' round on our floor tryin' to wipe up mud...with little pleasure or success...Daddy watched us today and he isn't, shall we say, as persnickity about cleanin' us off when we come in....

How 'xactly did ur mom get flattened on the wood floor by Pockets...um...that woulda been a video we coulda sold on ebay along with some poppycorn...like that??
Wow...ur peeps are using up what a large store of the Patience Supply that has to be in abundance in those terrier experienced homes. Have you tried a Gentle Leader on him? Mumsie walks Stan hooked to a Gentle Leader while he's wearin a nonhooked up prong collar...he walks like Mary's little lamb like that. Last week we went to the dog park and he was on a flat collar...the only thing that saved her was her catching hold of the fence and holdin' on for dear life...he was takin' her for a ride!!!
Keep on postin....we can emphathize....

Hey, Sadie here. I love hot sauce. It NEVER worked to keep me from chewing my long line during training! The hoomans finally tried a combo of cheap perfume and habanero sauce. I liked the hot sauce, but not the perfume!