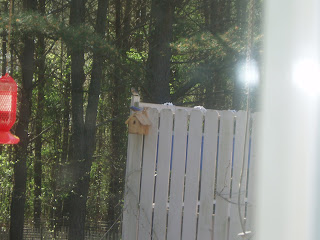 Hi everyone! We have a pair of Blue Birds that want to come in our house! The first picture is kind of fuzzy, but it's the male Blue Bird sitting on top of the Chickadee's house. We think the Chickadees have moved out since we haven't seen any activity around the house in a couple of days. The Blue Birds seem interested in the house, but the entrance hole is too small for them. The male keeps sitting on the dog crate that is out on our deck while the female sits on the deck rail. Every once in a while, he flies at the windows like he's trying to get inside. He's driving Penny crazy...she barks every time he flies at the window. I, Poppy just watch. We can't figure out what he wants! We don't have any meal worms in here! Mom is afraid he's going to hurt himself, but so far, he hasn't flown at the windows from any distance. He sits on top of the dog crate that is waiting for our new sister and he flutters up to the window from there. The female just sits on the deck rail and watches him. 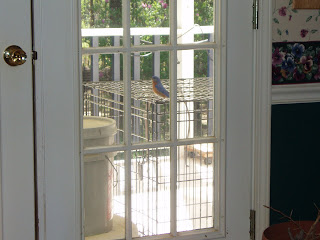 The upside down tomato plants that Mom and Dad planted are already growing! We are supposed to have frost on Monday and Tuesday nights, so they will have to cover them up with something to keep them from freezing! We seem to get a late frost almost every year. You would think our people would learn that and not put plants out so early! Nope...they do it every year! They keep hoping that it won't happen THIS year! Yeah, right!

Some of you have asked how long our pollen lasts. Well, it's usually about a month, but that varies from year to year. Sometimes, it's as long as a month and a half! We had rain on Friday night that washed all the pollen off the Aire-mobile, but it was all back by about 10:00 on Saturday morning. Whenever new people move into our area, it freaks them out! 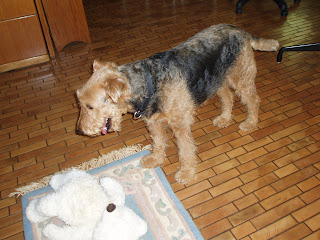 We heard a rumor that we are going to see our V-E-T on Tuesday morning. It's time for our yearly check ups and vaccinations. We aren't too excited about the shots, but we sure do like seeing Dr. Hardee. He just loves us and he gives us really good treats before and after our shots. I, Poppy eat mine right up, but Mom has to put Penny's in her pocket and give them to her after we get back in the Aire-mobile. She won't eat her's inside the vet's office. What a wussy! I have been limping for a couple of days and Mom thought it was because Penny and I are always t-boning each other out in the yard. This morning, she looked at my back left paw and couldn't find anything. She ran her hand along the lower part of my leg and she can feel a bone that doesn't match the other leg. Now, she's really worried! I only limp after I have been laying down for a long time and it hasn't stopped me from running around the yard like a mad fool. Dogsonally, I don't think it's a big problem, but since Mom is freaking out, I will let Dr. Hardee take a look at it.

I'm still trying to take Mr. Bear outside, but I haven't succeeded, yet! He keeps inching closer to the back door, but I keep getting caught!

Posted by Princess Patches at 12:50 PM

I love going to the vet! I totally have to go tomorrow morning to get my last series of shots! Woohoo! Don't you just love how they give us treats for doing what we have to do anyway!!!

Sorry to hear about your leg! I hope everything is okay! Let me know if I should start sending some intense ESP your way! Actually, nevermind...it's on it's way now! Don't be alarmed if you feel a mild jump throughout your furry body!

Mom is so jealous that you have bluebirds! She says that she would LOVE to have them at our house!
We hope your leg feels better soon, Poppy! I get limpies every now and again because I don't act my age and do something stoopid to try and keep up with Mitch. We hope you just need a rest like me!

We hope your leg isn't anything,and that you get a GIANT cookie at the Vets!! We love your bluebird! Love A+A