Hi everyone! It's me, Petey! Since I am a wheelie and it's wheely Wednesday, I get to do my first post! The Blue Birds are still here and I went outside to check out the feeding station that our pawrents made for them. 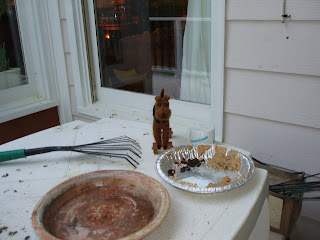 They have a nice water dish for drinking or bathing in. They also have a tray of food. It has raisins, peanut butter, pieces of cashews and some corn meal. Yesterday, Mom and Dad tried to find some meal worms for them, but the store they went to was sold out. They won't have any more until tomorrow, so they came home and made this tray with stuff that Blue Birds really like. 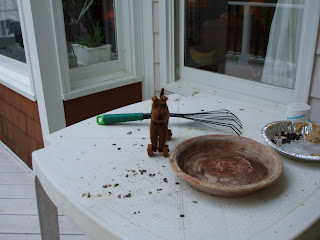 The tray of food is on the back corner of this table because Penny and Poppy would really like to have a taste of that peanut butter and our pawrents don't want to take a chance on them getting into the raisins! After the vet bill that they paid yesterday, they sure don't want any sick doggies! It seems that the tray of food is attracting more than just the Blue Birds. A female Cardinal came for a little taste and then an evil squirrel showed up. That crazy squirrel was right on our deck! We didn't get any pictures of him, because Mom was too busy running him off the deck to save him from the jaws of death. Poppy and Penny told her they would take care of him, but I guess she didn't want to see blood, guts and fur all over the deck. Those large 'dale jaws could do a real number on that evil squirrel! 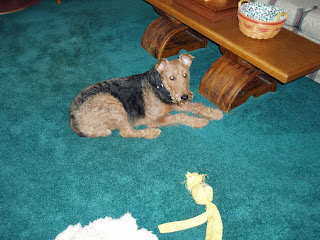 Well, this is Petey signing off and I'm turning the bloggy over to Poppy so she can tell you about the real dogses trip to the vet. Hi everyone! It's me, Poppy! As you know, Penny and I had to go to see Dr. Hardee, yesterday, for our yearly check-up and shots. Mom was a little embarrassed to go there since she fell down in their parking lot that last time she was there. She got over it, though, and took us anyway. Once we got in there, the first thing they did was weigh us. It was not a pretty sight! We have both gained weight and Dr. Hardee says I need to lose 4 1/2 pounds and Penny has to lose 6 to 8 pounds. That is going to put a serious dent in our treat schedule!
Once we got into the exam room, they took our pictures for the little plastic cards they send to our pawrents. They didn't have a problem getting a picture of me, but Penny was another story. She hid behind Dad and wouldn't turn her face to the camera at all! Finally, Mom and the Vet Tech managed to get her from a side view! It isn't a great picture, but it will have to do.
Next, they cut my toe nails and gave me a couple of treats. Then they did all the nasty stuff like taking my temperature and stealing some of my poopies right out of my fuzzy butt! I hate that part! Then, Dr. Hardee came in and gave me all my shots. Since he needed to look at my leggie that I have been limping on, he had to put me up on the table. I hate it when that happens! You would think they would put something soft up there for me to lay on, but nooooo! It's just a cold, hard table and it wasn't very comfortable. He moved my leggie all around and says nothing is torn and nothing is out of place. He thinks, that since I am almost 8 years old, I probably have some Arthur-itis. The next thing he did was look in my eyes. Remember when Captain High Pockets slammed my head into the coffee table? Ever since that happened, my eyes have been oozing some gunky white stuff. Mom has been using sterile eye-wipes and they were doing a good job, but she wanted Dr. Hardee to look at them. Now, I have to have 2 drops of medicine in each eye 3 times a day for 5 to 7 days. Yuck! The first time they did it, they sneaked up on me and I let them do it with no problem. Mom has done it to me 3 more times, now, and I don't make it easy for her! I know what's coming, now!
Penny got a very good report card from Dr. Hardee! For about 2 years, now, she has had a problem with drinking huge amounts of water and she has to go outside, a lot, in the middle of the night. Well, about a month ago, Dr. Hardee told Mom and Dad to put her on a senior dog food. They did it and it's working! Woohoo! She still drinks quite a bit of water, but hardly any at night and she hasn't asked to go out, in the night, for a long time! He also says the senior food should help my Arthur-itis and it should help both of us lose some weight. We sure hope so because we are totally against giving up any of our treats!
Aire-hugs,
Poppy, Penny & Petey!
Posted by Princess Patches at 5:59 AM

That bird food sounds mighty tasty, Petey! No wonder Poppy and Penny want at it! So would we!
Gosh guys! We have to do whatever it takes not to have to give up our treats, right?!

I overheard mommy calling the vet about Cosi & me getting our yearly appointment, & oh horrors, those stickie things called shots. Luckily, we both aren't due until July. I knows I outweigh Cosi cuz I am now bigger than him. (-Juneau-)

You can send me some of your excess weigsht if you like girls, me still be a skinny ribs, tee hee!

Hey Petey,
Our Mama loves to watch the blue birds too. They nest in these little boxes that we hang in the trees for them. After their babies hatch, the Mama & Papa birdie feeds them these ugly green bugs that they catch in the flower beds & also some green worms. Ewwwwwwwh! Glad to hear that Poppy doesn't have an injury. I Butchy need to get my shots this month & Snickers needs to get her blood thyroid levels checked again. It's funny you mention about Poppy drinking HUGE amounts of water cause I Butchy do too. The vet has checked me out & everything is working normal. What brand of food have you switched to??? Please let us know. See you next week.
Luv & Wirey Hugs!
Butchy, Snickers, Roxy & Max

Hi, Penny and Poppy!
Its not funny to be on a diet! Believe me! Sure I hope you will not have to be without treats!
Kisses and hugs
Lorenza

Hector here -
Forget about those other doggies, wheelies rule!

Gee we hope you aren't put on too strict a diet. It is no fun if there are no treats.
You both look fine to us anyway.

I am so glad your trip to the vets went well and I hear that senior food is really good. I am sure they have snackies that are low in calories and if so I can have my mum send you some....
I hope your eyes get better, the drops will sure help.
Deetz

First of all...do you think a squirrel tastes like chicken?

Secondly!!! Ack the vet!!! I love the vet, but the butt probing is definately not a good thing!

I limp on one of my front legs too, the vet said she thought it was growing pains.

Congrats on sleeping all night and not peeing! It's crazy what our dog food can do to us furry things!

Hi Petey, you sure are a small doggie.

Good to know that your report card from the vet is good! Yipee!!!
Ohh.. the word 'diet' sounds familiar.. I think my mom says it a lot!

You are so lucky to get yogurt everyday. I just got it cuz my mum is on a diet and I was starring at her and making her feel guilty, so she decided to share.
Deetz

Why are vets always saying us dogs need to loose weight? I think vets are trying to make the tret making companies go out of business!
Kaos

Hey Petey, it's nice to meet you!
Glad to hear that Penny & Poppy got on OK at the vet. Shame about the treat cutback, I feel for you pals! J x

Hey! Penny and Poppy want bird food? I will have to try that!

Come see my sissy...She is bald, so I have to keep her warm...Can you believe that? A bald sissy for me?!

You ladies look just PERFECT the way you are to me... :)

Your Wubba is a little torn! Is that from Pockets?

Ok, what's with the Airedales and wheels? This is the second Airedale blog I've seen wheelies, and while I wouldn't mind a faster mode of transportation, I'm a little weirded out by just how many there seem to be. Is this just an Airedale thing or are other breeds forced onto wheels?

MMMMMmmm,treats are more tasty than dinner I always think don't you, so maybe give up dinner? ! Glad the vet is helping you get better though.