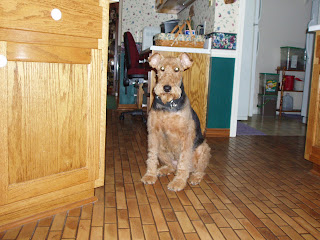 Hello everydog, kitty, hammie and hooman! It's me, Poppy. On Saturday, I got to go for a ride in the Aire-mobile. Usually, as I ride in the Aire-mobile, I can figure out where we are going, but this time was different. We went to someplace I had never been to before. I got to go to a brand new PetCo for my summer Aire-cut. The lady who groomed me was very nice, but all the times I was lifted on and off the grooming table made my muscles very sore. Mom says if I would learn to hold still when being lifted, that wouldn't happen, but I flail my leggies all over the place so my arthur-itis acts up the next day. Now that 2 days have gone by, I am feeling much better, but I am still a little sore. Mom has been putting the heating pad on me and that sure feels good. I stand completely still for 10 minutes at a time. Mom says she can tell I like it, because I usually don't stand still for 10 SECONDS...never mind 10 MINUTES! 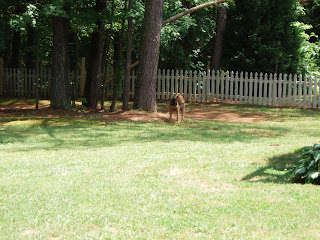 The verdict is finally in on whether I was just fluffy or fat. It seems that I didn't have as much excess hair as Mom thought. When the nice lady brought me out to her, she freaked out! I am a pudgy pooch, porky pup, pleasingly plump or just plain fat! Now I am on a very strict diet...yes, I said D-I-E-T! My food and treats have been cut in half. That is just soooo not fair...especially since Princes Patches gets EXTRA food and treats! Mom and Dad are hoping that Patches and I will rip and tear around the yard, once my soreness goes away. It looks like that might actually happen since we have been playing together inside the house! 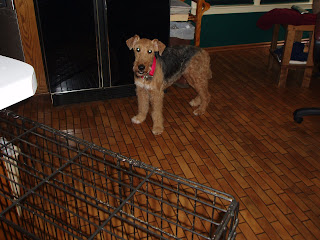 Patches is doing great and starting to gain a little weight. Her ribs aren't so obvious anymore and this red collar is the third one she has had on in a week. The first one she wore was borrowed from Ezzy Rider because the collar our mom took to pick her up with was way too big. Next, Dad put a black one on her, but with my new Aire-cut, he had a hard time telling us apart in the dark. Of course, he wouldn't have had that problem if he could see our hind quarters or if he reached down to touch us! Now, Penny's collar is blue, mine is black and Patches' is red. Now, even the neighbors should be able to tell us apart. 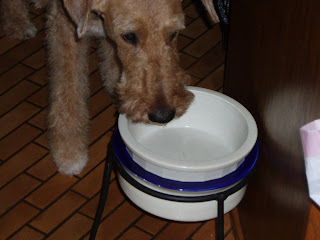 This is Patches licking the last smell out of her food bowl. She eats at the speed of lightning and then keeps licking the bowl. I think she thinks that if she licks it long enough, more food will magically appear! Penny and I think she is getting preferrential treatment! She gets more food than we do and she sleeps on the guest bed. Who told her she could do THAT? Oh, well, at least Penny and I still get the run of the house when Mom and Dad go somewhere! Princess Patches still has to stay in her crate while they're gone!
See you next time, everybody! We're headed out to the backyard to chase some squirrels!
Aire-hugs,
Poppy, Penny & Patches

Posted by Princess Patches at 6:54 AM

A diet? My mom threatened to put me on a diet and I had a talk with her. I told her that was my winter weight and if we had a yard tht had something besides mud in the winter, I wouldn't get so plump. I told her if she takes me camping and swimming and takes me to Grandma's house a bunch to run in her back yard, then that weight will go away fast. So far it's working, but I noticed the cookies and treats aren't coming like they should. Good luck!!
Kaos

Poppy
I don't think you awe fat at all..I think you look pwetty spiffy wif youw new aiwecut! and once you don't huwt anymowe and can woun awound, the pounds will melt off and you'll be back to tweats again..don't wowwy...I'm so glad patches is doing so well..she looks gweat!
Thank you all fow all youw aiwezen fow Daddi !!it weally helped..he will be tiwed fwom all the meds fow the next ttwo weeks, but he's soooo much bettew, and he's home!!
Thank you again
smoochie kisses
ASTA

You don't look plump to us at all, Poppy! Obviously the scale at the new PetCo is broken and doesn't give the correct weight! We hope your mom realizes this and continues to give you treats too! BTW, your aire-cut looks beautiful!

Poppy, start catchin those squirrels cause I hear they make good eatin!

And maybe Patches is eating super fast now cause she knows diets can make a dog desperate for a few extra kibble!

Oh, poor Poppy to have become a full figured gal underneath the aire-fuzz. I think doing the zoomies should help burn some off.

Sounds like your new sissy is fitting right in.

Wow it is so nice to meet patches....I won't allow an airecut at all....I am too scared.
Deetz

You look like the prettiest airepooch to me, Poppygirl. I like you just the way you are. Hope your arthur-itis feels better. .. and Happy Belated Birthday to Patches. She sure is a cutie!

Oh no not that! Not a diet!! You have my sympathies.
ECHO

Hi, Poppy!
You are not fat! So sorry you are now on a diet! I know about that. I've been on a diet for more thant 6 months!
Glad Patches is gaining weigth!
Kisses and hugs
Lorenza

Oh Poppy, I understand about the DOG Diet, I'm on one too and they are no fun. Mine is Vetrinarian recommended, so Mom and Dad are very serious about it. Hopefully your arf-fitis feels better real soon and you and Penny and Patches can run like the wind out back!

Poppy, you look very pretty with your new haircut and not fat at all. Maybe Patches is just making you look that way by comparison. When Patches gains weight you will look just right.

Nice hair cut! I don't think you look porky. Ziggy has to eat diet food and my mom has been telling me I need to exercise more or else I'm getting less too. What?!?!

Well I think you're perfect just the way you are!

Cassidy still gets 3 meals a day whereas I get too, and I make a fuss every time!

Did you catch any squirrels?
Deetz

Dieting is hard and not fair! Everydog has a right to lots of treats. I'm sure there's a rule about that.

Nice new aire-cut Poppy! Honestly you dont look fat to me! its unfair youre on a diet.. maybe Ill sneak you some nice homemade goodies my mom made hehe. Although I dont want to get you in trouble so maybe not!! Im soooo glad to hear that Patches is doing better and finally gaining weight, she is such a sweety!

WHAT!!!! Diet???? Doesn't your mom know that us Airedales eat so that we can store energy for those times when we really really need it! So, it's not fat...it's stored energy!

Maybe you ought to sneak some of Patch's food for extra secrative energy!

When you get your goody package don't forget to go over to Chef's Album and submit the pictures of you opening your Goody Package!

Poppy we're sorry to hear you have to be on a diet...you're right, it's so not fair but you're pinkies are only doing what is best for you.
It's great that Patches is doing so well. She sounds happy living with you guys.

You like a fine figure of a doggie to me Poppy and the new 'air cut looks pretty. Don't worry the zoomies will make the pounds melt off so you'll back to full treat rations soon.