Hi everybody! It's me, PorkChop! Thanks for coming by to see us for Wheely Wednesday. 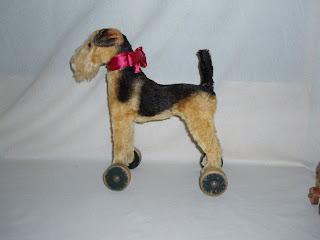 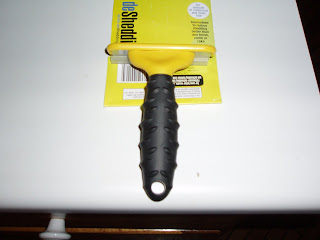 Our mom bought a new tool to torture the real dogs! It's a Furminator. She has decided not to use it on me because my fur doesn't grow back. Penny, however, is another story. Mom used it on her and got enough hair to build another dog! Patches and Poppy have a hard time sitting still long enough to be furminated, but that crazy Penny actually LIKES it! What a weirdo doggo! 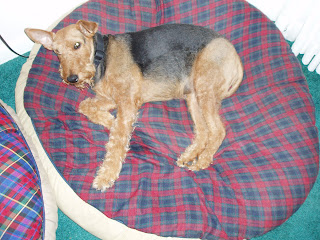 Poppy has been spending a lot of time in her bed lately. Ever since she came home from the new groomer, her Arf-ritis has been acting up a lot. She has a hard time getting up and she doesn't feel like playing too much. Mom thinks they gave her the wrong dog when she went to get her from the groomer's. She just isn't the same happy doggie that Mom dropped off. When they put her up on the grooming table, she fights it and flails her leggies all over the place. We think that's why she's hurting. Mom and Dad put her on some hip and joint care stuff, but it doesn't seem to be doing any good, so far. Don't tell Poppy, but I heard our pawrents talking about taking her to the v-e-t if she isn't back to normal soon. Penny and Patches think Poppy is just still getting used to having a new Aire-sister around that is sharing in the treats and attention. Patches has been here for 2 1/2 weeks and we would think Poppy would be used to her by now. Poppy is nice to her, but she doen't play with her like Penny does. Mom says Poppy might as well get over it, because Patches is staying! 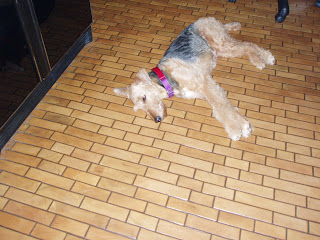 This is Princess Patches having a little snooze in one of her favorite places...on the nice cool floor right in front of the refrigerator. Mom says her collar is a "Red Hat Lady" collar. It's red and purple. This collar was, originally, bought for Captain High Pockets and he ate a piece out of it! Dad took another collar and fixed it so it works like a Martingale collar for Patches. We don't want her slipping out of it again. Mom says she will get a new one when Patches gains her weight back. She's put on about 3 or 4 pounds since she's been here, but she still has a long way to go. She has finally quit roaming the house, at night, so all my wheelie buddies and I have resumed our nightly excursions when everydog else is sleeping! 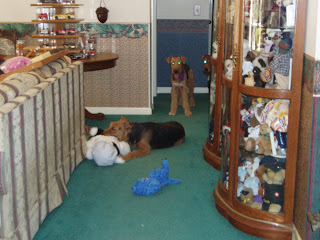 My bear buddies in the curio cabinets have been joining us wheelies on our great adventures. We don't dare come out during the day because somedog is always around. Poppy is still sucking on the cow dog and Patches is giving her the evil eye! 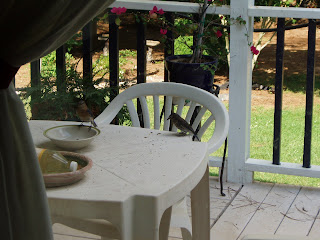 Today, we are getting a new roof put on our house and we sure hope it doesn't run the Bluebirds off! There will be lots of pounding so we are expecting lots of barking! We have found out that there are three baby birdies instead of the two that our pawrents saw leave the nest. One must have flown before the other two. It's slightly bigger and has some blue developing on it's tail feathers. All 3 of the babies are showing up on the feeding table several times a day. Mason, Mena and Mitch take turns feeding them. One of them will actually get right down in the bowl of meal wormies and eat, but if one of the adults is around, the baby opens his mouth and waits for them to shove the wormies in. See all those pine needles on the floor? Well, Mena has built another nest and she dropped some of the pine needles on her way in. We think she has already laid more eggies because every time some other bird gets close to the nest, Mason runs them off.
Well, everybody, I'm already back in the china cabinet where it's safe and we are just waiting for the pounding to start. I plan on spending my day snickering at the real doggies as they bark their heads off and get in lots of trouble. See you all next Wheely Wednesday!
Aire-hugs,
PorkChop

Posted by Princess Patches at 5:06 AM

Hey Pork-Chop, if mum got that much hair from Penny, does that mean you may have a new wheelie friend soon! ;-)

Well, my mom bought me the Furminator and I LOVE it. When she uses it on me I go to sleep. Ziggy likes it too but Libby, the 3-legged wonder cat, doesn't like it so much. I hope Poppy feels better soon! My mom gets a sore back some times and says it's no fun to hurt. Maybe the v-e-t can help her feel better.

Hey Penny and Poppy, I am finally catching up on all of the excitement that I have missed the past several weeks. I am excited to hear about your new sister Patches! Poppy, I have arf-ritis too, in my back legs. I take Cosaquin (sp?), but I also just started taking fish oil caplets from the vet and they actually seem to be helping!

That Furminator thing sounds a little scary, but I do like being brushed.

Hi Pork Chop! We don't own a furminator but mom is seriously considering getting one now that you're giving it your stamp of approval!
Tell Poppy that we think that when you start taking glucosamine, it takes awhile before you notice any change. Mom has me on some Liquid health level 5000 stuff and I run around like a puppy and I'm almost 10! I've been on it almost a year!

Now, what exactly does the furminator do? It pulls out fur??? If that's the case, what the crap it that! My human gets mad when I bite her hair to de-shed her...why do they get to torture us while we have to endure the pain? Hehehehe, secretly...I think I would ejoy the furminator.

I'm sending out some ESP for Poppy! Hold on!! Itsa coming!!!

Hi Porkchop
Ummm, I am kinda worried now about Poppy. Do you think the groomer was mean to her? Gosh I sure hope not! I heard that sometimes they sedate you, do you think they gave her too much? I sure hope she is just jealous and wanting some attention...Maybe a paper towel cast will make her feel better.
Deetz

So far I'v been pretty lucky. My Mom hasn'tgotten a furminator yet. She keeps threatening to, but hasn't yet. I hope Poppy feels better soon so she doesn't have to go to the v-e-t! I'm sending lots of good doggie vines to you Poppy!!
Kaos

We hope everyone gets back to normal soon, even the birdies. A new roof is cool, being dry is important!! We are thinking good thoughts for Poppy.

I hope Poppy is feeling better soon. Grooming appointments can take a lot of dogs when they get older.

I'm glad Patches is settling in to her new home and the pecking order of the pack. What a lucky dog she is to get a second chance at a new life style.

hi Pork Chop, wow, lots of news from your neighborhood. we're glad to hear that Patches is doing well, but now we are going to worry about Poppy. we hope that she is liking Patches, but we don't want her to have sore joints.

that's nice that you are getting more freedom at night to roam, but be careful of those aire-dogs. they wake up easy! hee hee

Hello Pork-Chop. Woh.. I wonder if the hair from the furminator will make some wheely siblings for you.
I hope Poppy feels better soon

It is so good of you to update us about life in your household. A Furminator sort of sounds like a close relative of The Terminator...scarey stuff!!!

I hope Poppy is feeling better soon. Its weird that she has been achy since the groomer. Hope nothing happened there that they didn't tell you.

Sorry about that blasted furminator thing. I get furminated almost every day and I do not approve.

Oh I hope Poppy is feeling better soon - my Aire-Aunties both have arthritis (though one of them just got two new hips!), it's tough being on the table all day.

Mommy has a furminator for the kitties, but she's never tried it on me - I'm not sure I like that idea!

Porkchop hi,
Thanks for the update on you and the girls. Gotta say the furminator sounds a bit scary. We're sending aire-zen for Poppy and hope that the vet can help her arf-ritis.

Great job reporting Pork-Chop. I sure hope Poppy feels better. My grandparents dog, Spencer, has the arf-ritis too. Just this year he had to start taking meds and he's like a new dog. He's all spry and stuff now.

Mom is interested in knowing if the Furminator works for you guys. I'm a very furry 'dale. I got shaved down during the last weekend of April and I'm already showing a full winter coat. Apparently my fur doesn't realize it's summer. He he!

Well Pork Chop, that was quite a story fer a little fella like you...sorry to hear about Poppy...hope she's better soon...we have a furminator too only ours is blue...Gram gets a ton of hair outta us with that thing...wish it would get lost somewhere...but I guess it is better than the stripping comb...now that smarts sometimes....

Hey Pork chop, thanks for the latest report, you have a great view from in the china cabinet! Sorry to hear poor Poppy is not well, seems a bit odd that she cam back like that from the groomers, I do hope they weren't meant to her. Guess that's why your Mom has got a Furminator? I actaully like being stripped so think I might like the Furminator too!!Hmm I wonder...Look after those aire's girls Pork Chop.

Hey Porkchop! I take chondroitin and glucosamine for my arthritis and the Js think it helps. I've never been furminated but I just KNOW I'd hate it! Hehehe! Jx