Hi everybody! It's me, Petey! I'm reporting today from my home in the china cabinet. My buddy Knut the polar bear, who lives in the bowl next to me, is telling me a secret. Ok, it's not really a secret...he says Poppy got her bandage off this morning. She's doing much better, but you can tell she isn't 100% better yet. It is a good sign, though, that she has started humping her toys again. That's always a sign that she is getting back to normal! 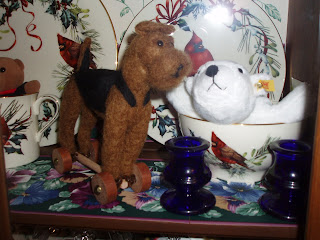 She's spending less time in her bed and more time begging for treats. She's also running to come in from outside, now, instead of just walking slowly. 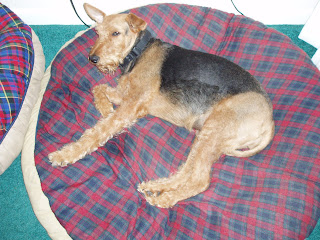 I've been busy watching the Bluebirds. The mama and papa have a new batch of eggies in their new house. Yesterday, they hung around the house all day so our pawrents think maybe the eggies were hatching. I guess we will know pretty soon if they start carrying the meal wormies into the nest. In the mean time, the 3 little piggy babies are coming to eat wormies from the bowl. They eat by themselves until their mom or dad shows up. Then, they open their mouths and act like they can't feed themselves. What lazy birdies! They have also been taking baths in their water bowl. They VOLUNTARILY take baths! None of us doggies would do THAT! 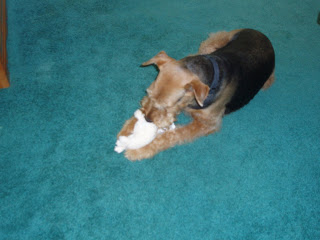 Poppy is still playing with the crab that Pedro sent us. He doesn't squeak anymore because Poppy, Penny & Patches loved him to death. That doesn't stop Poppy from carrying him and throwing him around though. Patches has tried to take him away from Poppy a few times, but Mom makes her get away from her. She isn't taking any chances on anymore doggie fights until Poppy is all better. It's a good thing us wheelies don't fight! We just stand around in the china cabinet, looking cute until the lights all go off at night...then we start wheeling all over the place! We always have to keep our guard up, though, just in case one of those real doggies decides to make a trip to the kitchen.
See you all next Wheely Wednesday!
Aire-hugs,
Petey the wheelie (and Poppy, Penny & Patches too)

Posted by Princess Patches at 6:56 AM

I'm glad Poppy loves the crab so much! I've been playing with the balls that Pearl sent to me. The goody exchange was soooo much fun!

Well we are glad she is feeling better!! This kid that is with us (temporarily we might add as he is eating us out of house and home) named Sullivan says hello..Love A+A

Hi Petey! Thanks for updating us on Poppy!
See you next Wednesday!

Birds are very strange, that's why I chase them. It's great to hear Poppy is feeling better. I hope she keeps doing better.
Kaos

I'm so glad that Pooppy is feeling better! I love that she is up and humping her stuffies again. Nothing beats a good hump. Hope there are no more dog fights, at least you get to stay safe in the cabinet. He he!

Glad to hear the good news about Poppy.
your chihuahua friend

Those wheelies are funny!! Mango has one too!

I wonder if they have a Malamute wheelie? I wonder where I can get one if they do!

Thanks for stopping by my blog! I will be sure to check in with you!!!

Curio cabinets have been around for centuries - and these pieces add a touch of timeless beauty, style, and elegance to any room - whether it is done in a traditional, contemporary, or modern design.Where others display their treasures and collectibles on ordinary shelves and tables, you can really make your valuables stand out, and draw attention to them with a curio cabinet.Today, there are curio cabinets that work in every room - whether it is your formal living room, dining room, family room, bedroom, kitchen, or even a child’s room. They come in various material and finishes - oak curios for instance are quite popular.The amount of space that you have in the room doesn’t matter either. With the wide variety of shapes and sizes, you will find a curio cabinet to fit in any space.

Yeah. Glad you wheelies are peaceful creatures. Poppy sure is getting better now. :)

I'm not allowed to have chewies in the house with pee-wee because I always want to have all the chewies, so when we get bones I have to go outside while pee-wee stays inside. Some things just can't be shared.

I will say that pee-wee knows that ALL stuffies belong to me, so he always surrenders when I ask for one back. Maybe Patches is even more alpha than you?

Hi, Petey--
We haven't greeted you before: HELLO!!! You look like a lot of fun. :) Glad to see that Poppy's better. Hope everyone there is doing great!

We're still traveling in Montana--thanks for visiting our blog!

Good news Poppy has her bandage off and begging for treats.A good sign! You seems to have the best vanatage view in the house there Petey!

Petey, thanks for the update on Poppy. We're glad she is feeling a bit better. Paws crossed for a complete recovery and no more fights.

that's a lot of good news. we're glad to hear that Poppy is feeling a bit better. that was a scary fight that those girls got into.

Petey, thanks for the update on Poppy! I think it is a good idea too that Patches stays away from Poppy and her dead stuffy. That is just until she feels 100% then game on!!! Have a good weekend girls.

Hey Petey, glad to hear that Poppy is getting better! J x

Ladies!!! My mom saw the WFT your mom made!!! That is soooo cool. I mean Cool with big C!!! Does she make special orders???? Does she have a website??? Curious minds want to know..ok ok my mom wants to know!!!!!

Petey! Penny! Poppy! Patches!!! Hehhehehe...you all are the 4 P's hehehehe! I haven't yet tried humping any of my stuffed animals...but I like to hump any male humans leg, especially while in the presence of my human. All boys must know that I am to always come first!

As for those birds...I don't know who would voluntarily take a bath. That just seems rediculous to me! Maybe the baby birds are suffering from some heat exhaustion or there is a lack of oxygen to their brains. I think someone needs to check on those guys!!!

Hope you all are doing well. I looked for cheese kong paste. All I can find is the peanut butter and liver paste...but mmm cheese,that sounds delicious!

Sorry to hear about your poor leg Poppy, I do hope you're feeling happier today.