Hi, all you furries! It's me, PorkChop! Once again, I have been let out of my home in the china cabinet to tell you all what is going on around here. 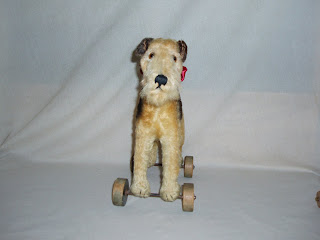 As was mentioned in our last post, Patches got her second Aire-cut yesterday. Now we know what she really looks like! She has put on enough weight that you can't see any of her bones anymore. Woohoo! She still needs to gain a little more, but she's looking much better these days. 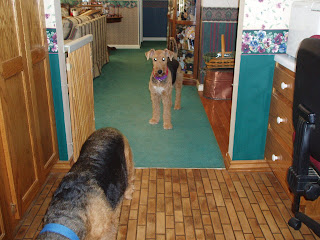 When she first came here, Mom didn't want to take her anywhere because she was afraid everyone would think that she and Dad were starving her. Now, she can go places because she looks much healthier. Well, all except that now she has some hot spots on her back. Before her Aire-cut, Mom kept looking at her skin because she was constantly scratching. She couldn't see anything, but now that all that hair is gone, the hot spots have shown up. Mom is using what's left of Penny's medicine on Patches and she's scratching a lot less. Penny's hot spot is just about gone. 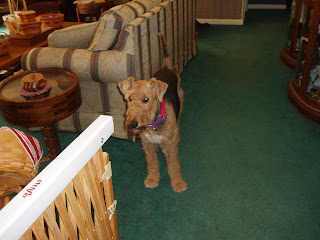 When Mom got to the grooming place, yesterday, the groomer told her that she was only able to cut the hair on the top of Patches' tail. Mom was a little upset because it looked worse than the squirrel tail! The groomer put Patches back on the table and distracted her by scratching her back and Patches let her scissor cut the rest of her tail. It still isn't perfect, but it's lots better than it was. 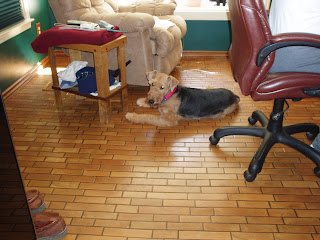 She also wasn't able to cut her toenails. Patches yelped every time she touched one of her feet, so she only got one toenail cut. The v-e-t will have to cut the rest of them when she gets spayed. That way, they can do it while she's asleep. 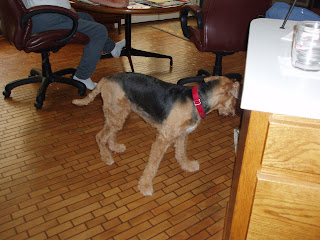 This is a pretty good picture of her new tail...at least you can see that it is a lot skinnier. It is still a lethal weapon, though! She wags almost constantly and has given our mom several bruises on her legs. 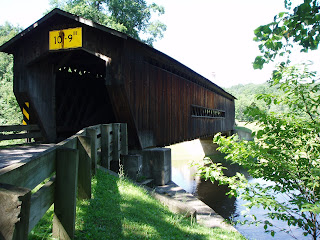 Here's a couple more pictures of covered bridges that Mom saw. We don't know why they didn't choose that county, in Ohio, for The Bridges of Madison County. They have so many that it would have been a really good place to do the movie. The whole area is gorgeous in the fall! 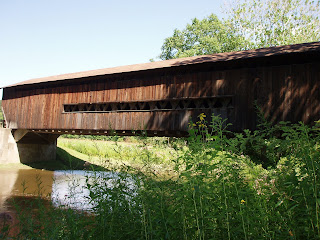 To get a side view of this bridge, Mom and her sister had to walk through the weeds to get down by the river. She was walking very carefully over rocks and stuff and she told her sister to get out of the way if they saw a snake. She would have mowed her sister down like bad corn! 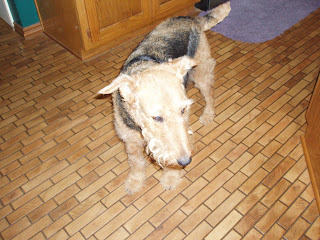 Here are a couple pictures of Poppy just in case you forgot what she looks like. Since Patches was not exactly cooperating for this morning's photo shoot, Poppy decided to ham it up a little. She's the only one in the house, right now, without any hot spots. 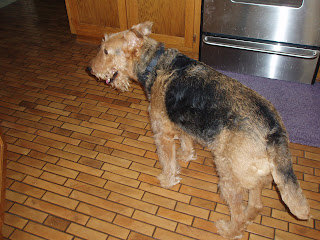 We have all heard a nasty rumor that Mom is going to a dog show this weekend...and she won't be taking any of us! That is sooooo not fair! We really like seeing other doggies! She says they are only going to see the Airedales and maybe a few other terriers. Why does she need to see OTHER Airedales? We think she should just stay home and see her OWN 'dales!
Well, everybuddy, I'm going back in my china cabinet, now, where it's nice and cool. It is still very hot here and we still haven't had any rain. Our pawrents keep watching the news and hoping Tropical Storm Fay will dump some rain on us.
Aire-hugs,
PorkChop (and Poppy, Penny & Patches too)

I have a feeling you might get some rain yet out of that tropical storm! Nice airecut Patches! I hate, hate, hate having my toenails cut too! It usually takes 2 people to do mine and I only weigh 7 pounds! You'd probably need 6 people!

Nice Aire-cut! I don't like getting my nails cut but thats because my mommy is scared she is going to hurt me! Do you want rain? If y'all want rain, then I hope you get some rain!
Hugs & Snugs
Eduardo the Snuggle Puggle

Ummm Patchs.... if you need a few fart bottles just let me know. I understand you didn't like your day at the spa. Feel free to put them up and use them as needed to escape the horror of the clippers!!

Love,
Willow
Did Paco arrive yet?

Hmmm our pinkies like seeing other airedales too. You'd think we'd be enough for them wouldn't you????
We hope Patche's hot spot goes away soon. Willow gets lots of hot spots.
Hey Patches, look'n good with the new airecut!!!

Your hairecut looks just beautiful, Patches! We hate having our nails cut too!
We love the covered bridges pictures! Our mom wishes they could go to Ohio and see all the ones your mom saw!
Bummer about you guys not getting to go to the dog show!

I really despise having my nails cut too, so I totally understand. Wheels don't have to be trimmed! I think she looks great after her hair cut and I hope those hot spots go away soon so she can go out and socialize!

Hey. Squirrels look deliciously tasty. They are mighty good-looking. There's nothing wrong with looking like a squirrel!

Hope your hot spots feel better! There are certain "cooling" foods you can feed to help them heal faster and stay away for good. (They're really anti-allergy foods for pups - no grains, as they are usually the hot-spot culprits! Corn being the numero uno on that list as one to avoid.)

Hi, PorkChop!
I like Patches Aire-cut! I hope the med helps with those hot spots!
Kisses and hugs
Lorenza

Patches.... your Aire-Cut is beautiful!!!! Those hot spots are awful.... thank dawgness for medicine. I think Patches is really looking good now days.... says a lot for all the TLC that your mommy is giving her.

Aireslaps,
Apache and her tribe

You're not going to believe this but I found a big wheelie last week, since no-one re claimed him he's joined Wheelie Wed...

Pats & pets to all
Blue

Oh thanks for the update PorkChop. We just had rain this afternoon.

What is up with you guys and your hot spots? Yikes!
Patches is looking very sporty with her new Aire-cut.

Porkchop, we love it when you come out of the china den to give us updates!

Sounds like Patches is coming along well. You can't learn overnight how to sit still for grooming and toetrims. Soon she will like all the attention and fussing. And with cooler weather, those hot spots will go away, too.