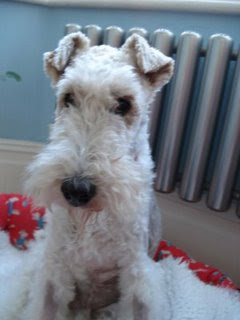 Hi everybuddy! It's me, Poppy! We want to wish a very happy barkday to Jackson and we're sending lots of healing Aire-zen so he can be back to normal and healthy and happy in no time! While our mom was away, she only had access to the internet a couple of times and she didn't even check our blog! Both times, she only went to Jackson's bloggy to see how he was doing. She sure was happy to see that his surgery went well and he's back home where he belongs with his J's! Woohoo! 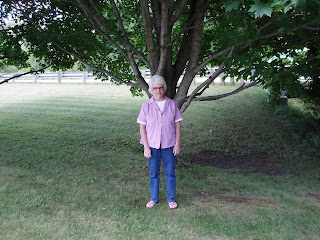 This is our mom standing in front of a tree in Ohio. The sun was shining in her eyes so her face is all scrunched up. She and one of her sisters spent a whole day touring some of the covered bridges in the county where they grew up. There are 16 of them, but they only made it to 7. They are kind of spread out, so they didn't have time to see all 16.
Our mom's father had a good laugh when one of his neighbors asked if he had a girlfriend. He told them it was his oldest daughter that they saw in his front yard...not a girlfriend. We TOLD Mom that she was getting her hair a little too white! It might be time to grow it out and start over with a new color. People used to tell her that she looked younger with blond hair than she did with black hair, but maybe just not quite THAT blond! She says that really old ladies are starting to tell her that she has pretty hair. Maybe the platinum hair is making her look too old! 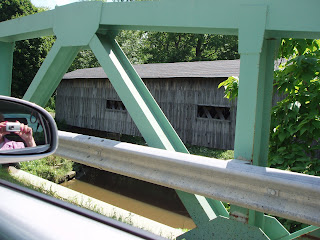 Anyway, she had a really good time with her family. They went to see the Longaberger basket factory and spent a whole day at Shaker Woods where they have a ginoumous craft fair in the woods. She couldn't buy a whole lot because she had to make sure her suitcase wasn't over weight. When she got to the Atlanta airport, the people in front of her checked a suitcase that was 7 pounds overweight and it cost them $90. Mom's wasn't over weight so she wanted to make sure it didn't weigh too much more when she came back home. She came across an Amish family that was selling maple syrup and she bought a half gallon. She mailed it home because by the time she put a few other things in the box, it weighed over 10 pounds. 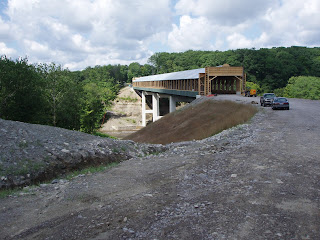 This is going to be the newest and longest covered bridge in Ohio once it's finished. You have to park about a half mile away and walk to the bridge in order to see it. They thought maybe you could walk across it, but the people working there said they couldn't.
We're very glad our mom is finally home! We were all good for Dad, though! We all ate our meals when we were supposed to and the worst thing we did was ask to go outside in the middle of the night. He doesn't know WHY we had to go out and we're not telling! Penny developed a large hot spot on the left side of her face while Mom was gone, so Dad took her to see the v-e-t. He said she was such a good girl that she got the "Dog of the Day" award! They shaved the hair on the side of her face and she gets a pill everyday and some kind of spray on the hot spot three times a day. It's already starting to look lots better. 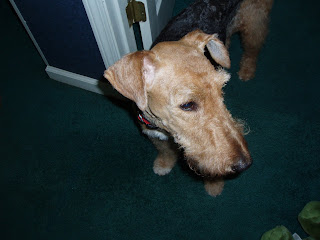 Patches is getting her second Aire-cut on Monday or Tuesday. Mom has to make an appointment for her, later today. We can't wait to see what she looks like without that awful squirrel tail! 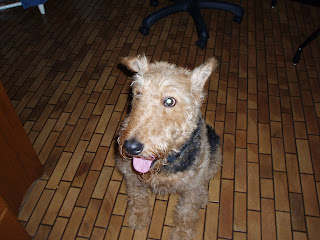 This is the first time in my almost 8 years that I haven't turned into a weirdo doggo when my mom went away. Usually, I lay on the rug in the hallway that goes to the garage because that's the door that Mom leaves through. I also refuse to eat for several days after she leaves, but this time, I ate every time Dad gave me food. Mom thinks that maybe I didn't miss her! Actually, I was just hoping she would bring treats for us, but she didn't. She says she couldn't see paying $15 for 6 ounces of doggie biscuits when she can buy them at home for lots less. We're just glad she's home!
Aire-hugs,
Poppy (and Penny & Patches too)

Posted by Princess Patches at 11:36 AM

So glad Mom's home for you...
But it was good she had a great family break - we hoomans need one once in a while!

We are glad you are back and we are glad she had a great time in Ohio. Tanner is from Ohio!!

Being all together again is better than having some treats no ? Do you like to go to the groomer ? I like it !
Kisses, Faya

We're so glad your mom is back and it sounds like your dad is getting a gold star for taking such great care of all of you!
We're glad your mom had a good time with her family and saw so many awesome covered bridges! They are so neat!

Hi, Poppy!
Sure everyone is happy with your mom back at home!
Glad she had a great time with her family!
Kisses and hugs
Lorenza

Holiday posts are great. Sounds like your mum had fun in Ohio. Those bridges would be something to see. Is Ohio the only state with covered bridges??
It's funny your mum mentioned that person in Atlanta having a suitcase that was over the weight limite. Has Auntie Wendy told her the story of her suitcase drama when she went to the UK with my pinkies?? lol

I am so happy your mommy is home. My mommy is impressed that you all behaved so well for your daddy. She made me read your blog TWICE!!! Hmmmmm wonder what she is trying to say. i can't wait to hear just what you all did while your mom was gone.

Poppy, you and your mom look like you have the same color hair in those photos. LOL Glad she had a great time on her vacation.

OOOOhhhhhhh Pl2 is doing flips....Lonaberger baskets....SHE LOVES THEM!!! PL1 says they are WAY too expensive but she doesn't care...she loves them!! SOunds like a lot of fun!!!!!! Love A+Aand a jealous PL2

Oh Poppy, I'm so glad that you were okay and let your mommy go away without being so sad. I think you now know that she will come back. I'm sorry for Penny's hot spot. That just sucks. Glad she is getting better. I like the stories about Grandma's trip and pictures. Looks like fun!

We're so glad your Mom is home. And how interesting they're building new covered bridges in Ohio. WE thin of those bridges as being old and historic.

Stay safe of winds from stormy Fay come your way!!!

Your Mom sure had a great adventure. Glad you gals were good for dad while she was away.

Still think she should have brought you home some cookies, though.

Sorry I haven't been around a whole lot lately. While being absent I got an airecut, and the groomer gave me a bandana that reminded me of you all! It has bird houses and little blue birds! Just like your little visitors!!!

Hehehehe, I'm saving it just incase you guys want it!

Glad your Mum got home safely and had a wonderful trip. Did you bowl her over when she came back?
Molly and Taffy

Glad ta hear that yer Mom is home again and it sounds like she had a good visit with 'er family.....Gram read about the covered bridges in Ohio and wants ta visit 'em sometime....she wants ta see the ones in PA. too but never gets ta do that....oh well.....someday.....sorry about the hot spot Penny got...hope it feels better now...enjoy the time with yer Mom....'n yer Dad too...

Tell your mom welcome home for us! I bet she was really happy you were good for your dad. Ask her if she met Clint Eastwood at any of those covered bridges, or is that only in Madison County...

Your mom's trip sounds like a lot of fun. My mom likes going to look at old buildings and bridgesand thinks looking at covered bridges would be like looking at both at the same time! lol
Kaos

I am so glad your mum is home and she had a good time while she was away. I like your mums hair...my mums hair is going white too, and she said she is going to have the groomer weave colbolt blue and dark brown into it and go all punk....I think she is crazy
Deetzy

Hi Mates
Thank you very much for your kind comments about Khomet and my mum. We're pleased your mum enjoyed her holiday. It is wonderful news about Jackson. He sure is a fighter. I'll be back blogging soon.
Love from Hammer

I'm so glad you Mom is home safe and sound, Dad's are good, but a pup really needs a Mom :-)

Yeah, isn't life so much better once Mom is home, I certainly think so. I hope you covered her with kisses and dogie jumps!

Glad your mum's back. Mummy liked looking at the bridge photos.

Hi Poppy Penny and Patches!
I'm sooo glad youw Mom came home! I bet that was a pawsome weunion..no mattew how gweat a vacation is , it's gweat to get home to youw family..I'm weally sowwy Penny had hot spot on hew pwetty face, but it sounds like youw Dad was a pawfect cawetakew and she'llbe fine...tell youw mommi that my Mommi's haiw would be mostly white if she didn't paint it..I help hew always, that's why it looks sowt of owange, hehehe
smoochie kisses
ASTA

So glad ur mom's back from O Hi O...that state always sounds sorta surprised, doesn't it??!!!

Those covered bridges are so pretty...we have one at a state park we go to not far from here...it was built around the turn of the century, we think!

Hope ur hot spot is feelin' better...both Scruff and I have been havin' some issues on our nethersections...hope no vetties in our future!!

Hey pals, thanks for your continued good wishes! Glad your mum had a good holiday. Jx