Patches is in BIG trouble! 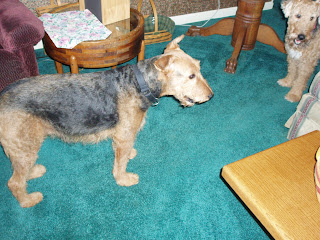 Hello, everydoggie, kitty, hamsterrier, bear and hooman! It's me, Poppy! I heard PorkChop telling all of you about our cold weather on Wednesday. Well, it's not over YET! It is only 20 degrees, here, this morning and I literally freeze my tail off every time I go outside. I heard Mom saying something about "Where the heck is Al Gore with that global warming thing when you need him?" 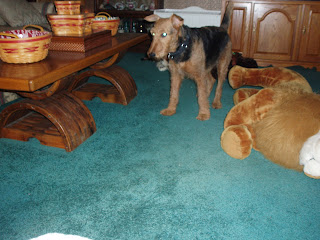 Do you see this look on my face? It's because I can't believe what Patches did! She is in sooooo much trouble! We have an area in our hallway where there is a seam in the carpet. Through the years, Penny's and my hooge toenails started to rip the seam, so Mom had someone come in and fix it. They did a crappy job, but at least it was better than a frayed out seam. Well, the other morning, our mom was in the 'puter room and she heard what she thought was one of us de-stuffing a stuffie. No big deal...it happens all the time. Well, when she finally came out of the 'puter room, Patches was munching on that seam in the carpet. Mom took a swat at her and missed, but then she started yelling lots of HBO words! There is no picture of the eaten area because Mom covered it up with a throw rug and she's too upset to take a picture of it. We really need new carpet, but until our mom gets another job, there will be no new carpet (or anything else). 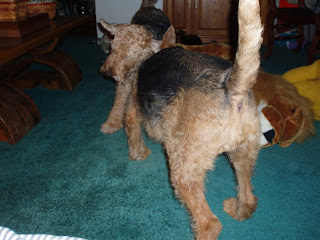 Our mom keeps trying to get a good picture of us playing bitey face so here's yet another attempt. Since we usually have a great game of bitey face right after our 6 p.m. trip outside, Mom has decided to keep the camera right next to the chair where she does her needle felting. So far, it's working pretty well. She even got a short movie of us, but so far, stupid Vista hasn't been able to upload it. She says she will keep trying. She may have to send it to the old computer and post it from there. Once again, she's saying HBO words about the inventors of Vista. She would like to see them tazered! We told her that's pretty mean, but she doesn't seem to care! 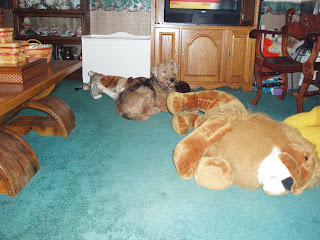 Patches likes to lounge on the living room floor, surrounded by stuffies. I don't know if you can see them, but there are some teeny tiny white spots on the carpet right in front of the coffee table. (You may have to click on the picture to biggify it) Those are tiny styrofoam balls that somedog (ME!) shook out of Pokey the giant lion. Our mom keeps saying he isn't long for this world, but I don't know what that means. I hope it doesn't mean he's headed to the trash barrel because every night I just HAVE to perform a secret ritual on him! Mom is hoping to get a video of me doing that, but so far...no luck! I am one quick doggie! 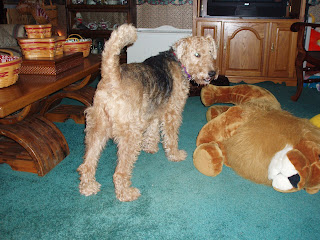 Patches was thinking about taking a bite out of Pokey, but I snuck in and grabbed him out of her jaws of death right after our mom snapped this picture. He's MY Pokey and I don't tolerate anydog else putting their lips or teefies on him! See that white toybox in the center of this picture? Well, that was a ginormous toy box that Dad made for US! We never even got to use it because Mom claimed it for all her needle felting stuff. That is soooo unfair, but she says she needs it to keep all the wool away from us doggies. Whatever, Mom...we'll just keep all our stuffies piled up in the corner and scattered all over the house!
Last night, Mom found a spot on Patches' neck that she thought was a tick. After she was done freaking out, she got a flashlight and had Dad hold Patches so she could look at it. It wasn't a tick! It looks like maybe a Poppy bite!...or maybe a Penny bite. We aren't sure who the guilty party is, but we DO know it's not a tick and it doesn't seem to be infected. Every once in a while, when the 3 of us get really rowdy and we're doing lots of Aire-snaps, somedog squeals. When that happens, our mom yells at us, but she usually can't figure out which dog did the squealing. Patches' bite probably happened during one of our many Aire-snapping sessions.
Well, furry friends, that's about it for today!
Aire-hugs,
Poppy (and Penny & Patches too!) 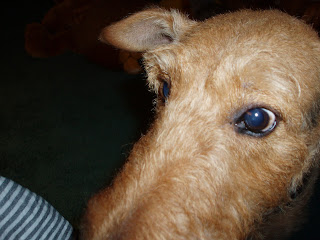 Posted by Princess Patches at 8:09 AM

Hello friends !
Véronique was hesitating to install Vista but now I think she will wait .... say thank you to your Mom !
Have a nice week-end with a lot of "bitey-face", the best game !
Kisses, Faya

It is all go in your house isn't it! Never a dull moment by the sounds of it!

Hope your lion friend stays around for a long time he is gorgeous.

Have a good weekend.

Uh oh! Patches better behave! Mom told me last night that Santa is checking on everybody right now to make sure they're bahaving.
Kaos

Hey y'all! We are freezing too! Literally-it froze last night. Yeah, we want to now where that global warming stuff is too!!!
Uh, gee, the carpet?!?! Woah-Santa won't like that we don't think. Humans are crazy about their carpets!!
Have a great weekend. And try to leave the carpet alone....
Hugs
Sunny&Scooter

YIKES! That's so not good that you are destroying the carpeting, Patches! You're supposed to be helping your mom out this time of the year for brownie points! Santa is watching, ya know!
We can't wait to see a video of your secret ritual, Poppy!

Crikey Patches, sounds like you really upset your mum this time. D would freak out if we did that too lol. We didn't know what HBO meant until our pinky B explained it was a tv channel in the States...that is right isn't it???

Oh, Patches!
I did that when I was a puppy but thankfully it is no longer interesting to me!
My mom has Vista in her computer and... and... well... it is hard to explain, you know? She does only basic things now!
Kisses and hugs
Lorenza

Uh-oh Patches! I never ripped up any seams in the carpet because we don't have any but I can see where your mom would be upset about that type of redecorating. Have a nice weekend and stay warm.

oooh ripping up the carpet will DEFINITELY bring about a TON of HBO words, I know this for SURE! oops!!!

Hope you guys stay warm.
There is a lot of chewing going on at my house now too.
--JB

Uh oh. HBO words are bad. That Patches! Pee-wee added some fringes to our new carpet and you can bet we heard the HBO words then.

I'm glad you didn't have a tick. That would be the end to be freezing to death AND get a tick. Momma says it is kind of scary that it is as cold where you are as here in Master Chew Sits. Hope it gets warm for you again soon.

Hi Guys Nice to see other dales in trouble. Wish humans would stay in the puter room. Mom had put the Sunday paper on the table in the kitchen. Well I am just tall enough to reach the top. So I though I would read what was going on in the world. Only I love to read and chew at the same time. Mom didn't think it was funny having pieces of the paper all over the floor. But I sure enjoyed it.Funny Mom has not had any luck in taking pictures of Grandpaw and me playing bitey face either.
HUGS & xxx
Falcon

Patches,
you better be a good dog or Santa Paws is gonna leave coal in your stocking.
Rambo

Oh Patches, I did a similar thing to our old apartment in Los Angeles - between the door to mama and dad's bedroom - they weren't pleased, but just give 'em a good head tilt and all will be forgiven :)

Thank you for leaving such a kind comment on my blog today.

I enjoyed reading about your carpet rip it up adventures, and your Mum's bad words ha ha ha ha ha

I have learned some of those too over the years.

You are welcome to add me to your friends list.

My mom gave up on carpets and pulled most of them up so we just have the wood floor and cheap area rugs. She says she can't have anything nice and have all us pets too. I think all us pets are nice things! I think she's mixed up...

Brrr,cold where you are? That can't be right. You will need to do a lot of poking to Pokey to get the stuffie out- go girls!

He he he, Patches reminds me of my Mommy's childhood dog, Skipper. He ate the wallpaper off the wall and then chewed away the linolium in the kitchen. he he he. You better behave patches, or Santa Paws will give you coal!

Ooooooo! I wish I had some carpet to rip apart!

Way to go Patches! Keep your humans on their toes! Woohoo! Hehehehe...don't tell your humans I said that kay!

Sorry I haven't been around for while ... things have been a bit rough at my place ..

I hope it warms up for you soon ..