Wheelie Wednesday...and we are freezing! 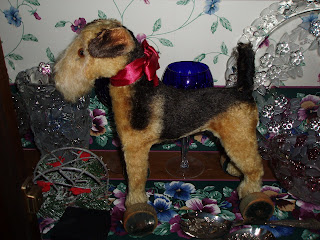 Happy Wheelie Wednesday everybuddy! It's me, PorkChop! The thermometer, on our deck, says it's only 17 degrees this morning. What's up with that? I thought Georgia was considered the deep south! It's not supposed to be this cold here in NOVEMBER! January or February maybe, but NOT November! 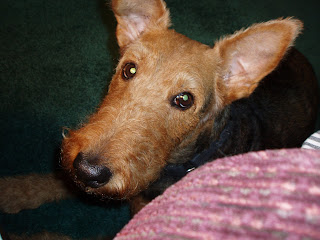 Poppy says she freezes every time she has to go outside. She just had an Aire-cut about two weeks ago, so she doesn't have as much wooliness to keep her warm as Patches and Penny have. Mom says Patches and Penny will each have one more Aire-cut and then no more until spring. Poppy is very glad she's already had her last one before the winter! 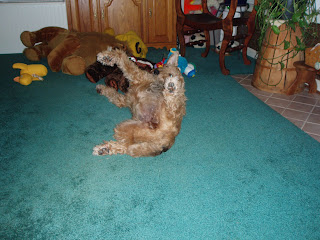 Patches has already de-stuffed 3 stuffies, this week. One of them (our big blue bear) had to go to stuffie heaven. The other two (Snoopy and Mr. Tiger) are still hanging around, but probably not for long. Snoopy has been here for over a year and although he had an eye-ectomy and nose-ectomy immediately upon moving in, he didn't start leaking stuffing until recently. Mr. Tiger will be here a year on Christmas if he lives that long. Believe it or not, he still has both eyes AND his nose! Yeah, we can't figure out how that happened either, but it's a fact! Patches has attempted the eye-ectomy many times, but so far, has been unsuccessful! 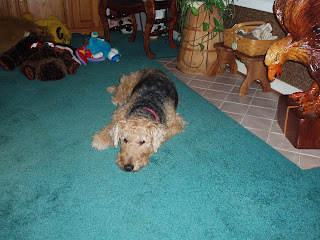 Patches decided to take a break from terrierizing the stuffies. Our mom's ginormous Eagle is watching her very closely. He knows he's safe from being de-stuffed since he is made of wood. However, we sure hope nodog decides to take a bite out of him. We have a large, decorative bird house in the foyer that is made of wood and our pawrents' first Airedale, Miss Pockets, chewed the wooden perch! Mom won't throw it out because it has sentimental value...whatever THAT is! That doesn't stop her from throwing out de-stuffed stuffies! WE think all of our stuffies have sentimental value!
Our mom wants to go outside, today and pick up leaves and pine straw with the magic picker upper thingy, but we think she might be too wimpy to go out in the cold. We told her that most of the frozen dog poopies would probably be sucked into the magic picker upper, but that isn't giving her much incentive to get dressed up like Nanook of the North and get out there. She said something about maybe addressing Christmas cards instead. She hasn't sent out cards in about four years and a lot of people probably think she fell off the face of the earth. Well, they will still have to think that because the only ones she is sending are on the DWB list! Yay, Mom! All our DWB buddies are WAY more important than all those other people anyway!
Well, everybuddy, I didn't even come out of my china cabinet to bark this to my personal secretary. I did open the door, though, so she could hear me and now I'm closing the door so I can stay nice and warm! See you all next Wheelie Wednesday!
Aire-hugs,
PorkChop (and Poppy, Penny & Patches too)

Posted by Princess Patches at 8:55 AM

w00f's 4 p's, its cold here in NC too..out froze me ???? off when me went to pp this morning..me thinks we gonna have a hard cold winter this year..mayb will git rid of all the skeeters..

Mother Nature is confused! You have the weather I'm supposed to be having!!! We are having record breaking highs around here! I hope Mother Nature gets it right soon!!
Kaos

OMG, we're in the same boat here! We have below normal temps and Mom groomed Mitch yesterday! The poor boy froze on our walkie!

Hiya Porkchop! It's been crazy cold here too (though not quite as cold as where you are) - and we've already got snow! Mommy says she could have done with a few more nice days before the chill!

Hi y'all! We are cold here too. It got nice today but willget cold again tonight and then for several days. Dang it!! Stay warm over there!!
Hugs
Sunny&Scooter

Hi, Porkchop!
Sure is cold there!
Here is cold only at night. During the day we have warm weather.
Take care
Kisses and hugs
Lorenza

Oh dear. Miss Poppy has to go outside without her woolies? That is very strange weather you are having.

Pork Chop,
Sorry you doggies are all freezing. I hate the cold. You can come to California...it was 86 degrees today. I was sunbathing today.
stay warm,
Rambo

Well done Porkchop for braving the chill to update us.
I'm glad it isn't that cold here!

Thank you sooo much for visiting our blog and thinking of us when our mummy and brother were sick in hospital. We are so relieved they are better now, but we really appreciate your support.

Love Molly and Gertrude (and their mum)
xx

Thank you sooo much for visiting our blog and thinking of us when our mummy and brother were sick in hospital. We are so relieved they are better now, but we really appreciate your support.

Love Molly and Gertrude (and their mum)
xx

I love the cold weather but I can see where Poppy would feel it with her aire-cut. Great job on the stuffies Patches.

[url=http://hairtyson.com]phentermine 37.5[/url] are tablets that resist slacken up on body weight. One of these tabs has to be enchanted with fizzy water be illogical, around 20 minutes before a repast, twice a day.

[url=http://www.payloansonline.com]payday advance loans[/url]
This is the best way to get all your health products online like green coffee, african mango, phen375 and others. Visit now