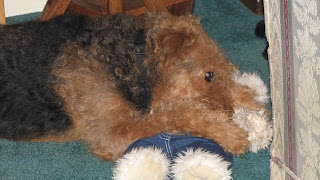 Hi, everydog and their hoomans! I, Poppy like to hug my stuffies and make really weird noises. As you can see, I'm sucking on this bear, but you can't hear the noises I'm making! Mom says it sounds like I am being severely injured, but as you can see, I am fine! The bear, on the other hand...not so fine! He has big croco-dale teeth markes in his back and one of his paws has a large, gaping wound. That's where we surgically removed the voice box that kept saying, "I love you!" Mom bought this bear for us, for Christmas and she didn't know it had a voice box. One day, she was on her way out the door to get the mail and she heard a tiny voice say "I love you". She looked around and couldn't figure out where the voice was coming from. She decided she must be hearing things and proceeded out to the mail box. When she came back in, Penny had the bear and she was trying to de-pants it. Nothing unusual there! Mom went into the kitchen and then she heard the same tiny voice saying, "I love you". Now, she KNEW she wasn't imagining it. She came into the living room to see Penny biting the bear's paw and it kept saying, "I love you." Mom was relieved to know that she wasn't going looney tunes! The bear didn't talk for long...about the 15th time it said, "I love you", Penny's big 'dale teeth bit through the plastic box that held the speaker. At that point, Mom confiscated the bear so she and Dad could extract the voice box before one of us swallowed something we shouldn't. What a bunch of "bu 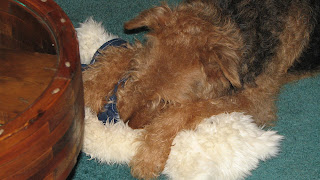 zz kills"!
Our Mom and Dad have done some pretty weird stuff with some of the noise-makers they have extracted from our stuffies. Dad removed a voice box from a Clifford the Big Red dog that sounds like a whole bunch of barking dogs. He made it into a door bell so when some of our neighbors come over and want to see Dad in his workshop, they ring the door bell by the basement door and it sounds like a bunch of dogs barking. They took another voice box out of a duck that quacks to the tune of "Old McDonald had a Farm" and it sits on a shelf by the back door. Whenever Penny and I won't come in from outside, Mom squeezes the "quacker" and we can't get in the house fast enough! We actuall had two of those ducks, but after seeing what we did to the first one, they decided to save the life of the second one. It makes a great 'Dale caller...it works EVERY time!
Aire-hugs,
Poppy & Penny (the stuffie killer)!
Posted by Princess Patches at 1:15 PM

Hi Penny and Poppy! Thanks for stopping by my blog. I always love meeting other dogs, especially lovely terrier ladies!

I have a chicken that goes "Cockadoodledoo!" if you squeeze it. I haven't managed to get the sound box out yet. I'm working on it!

That be such a funny post! Me can imaine your mummy thinkin she be hearing voices!

Wait til you see my new prison boredom relief toy, it be GREAT!

Your dad is so clever to make a barking dog doorbell! We love that idea!

Crikey you gals have a very clever dad. Wish B could make a fancy doorbell for our front door, that way our B&B guests could have a nice surprise.

Penny and Poppy
That is vewy funny what you pawents do with youw voice box thingies....I don't have my stuffies fow lon..maybe I should get a giant one..all the small ones awe sploding within a few minutes of me giving them a kiss,hehehe
you look adowable with youw big stuffy
smoochie kisses
Asta

I like squeakies, and it doesn't matter what sound it makes, just as long as it makes noise. Then Cap field-dresses them and Mom tosses the remains. Caps kinda hard on our toys. I like the doorbell idea, though!

We just love your blog.

Hehehe, J1 was laughing at the thought of your mum hearing the little voice saying "I love you" and not knowing where it was coming from!