More stuffies we can't have! 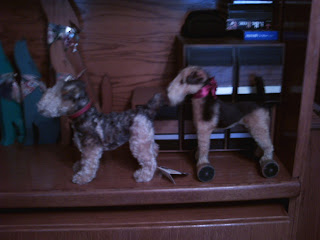 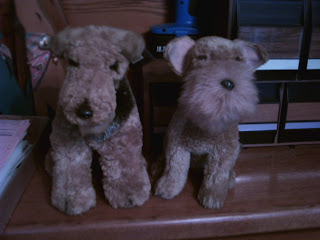 These are Mom's prized stuffies that we are never allow to go near. The two on the left live about 6 feet off the floor on an entertainment center shelf and the two on the right live in Mom's china cabinet where we can SEE them, but we can't touch or even smell them. She had a hard time taking these pictures because we were watching her every move and trying to get our furry mouths close enough to snag one. No luck! I guess we will just have to wait for yard sale season to start again. Almost every Saturday, our parents bring us new stuffies that they buy at yard sales. They used to buy them in stores for around $9 or $10 apiece until they learned that they can get them at yard sales for anywhere from 10 cents to a dollar. That makes a lot more sense since we usually destroy them within a few seconds.
We are just having a lazy day, today since it's kind of cold and ugly outside. We did go out and harass the neighbor dogs for a while, but that is only fun for so long and then we get bored. We used to be able to run from one side of the back yard to the other and harass two dogs on each end, but the two pugs moved away and now all we have is a Manchester terrier who is mean as a snake and a Rottwieler mix who doesn't pay too much attention to us. Their people would like to let them come over in our yard, but for some reason, we only seem to be nice to other Airedales upon first meeting. It's weird...it's kind of like we KNOW our own kind! On New Years day, Mom took me (Poppy) to an Airedale meet-up and I was very nice to all the other Aire-kids, but when a German Shephard walked by us, I tried to eat him! Mom was embarrassed! SHE thinks we need obedience classes. WE think we need to be around other dogs more! We also don't seem to have any problems with any other kinds of terriers. Maybe the whole thing is a terrier thing!
Aire-hugs,
Poppy & Penny
Posted by Princess Patches at 11:54 AM

My mom is oooooh'ing and ahhhhhhh'ing over your mom's prized Airedale collection! She loves all of these kinds of special stuffies too - the kind that we can't have!
I can be a real bit*h to other dogs that are strange to me too and it really doesn't matter what breed they are! I need them to know that I'm the Queen always!

We understand why the yard-sale alternative works best! There's this terrier-thing... Didja know that we were bred to take out a small animal in a single shake of the neck? Our mom calls me "Saw-Tooth Sephie" and Buster has a whole giant basket of decapitated toys! It ain't pretty.

PL2 has lots of stuffies that we drool over too!! Don't worry about getting along with other dogs..it is truly a terrier thing!!! Love A+A

Oh my! those are lovely stuffies. Muzzer doesn't have any that nice...hers tend to be more like...amish kids and that kind of thing. BUT...it is nice to know that me n Teka are Typical Terrierists...both in the "other dogs" area and in killing stuffies.

Muzzer says goodwills and thrift stores are good places too!

I bet we'd get along..I visted Maggie and Mitch and Puttew last summew and we played like mad and had a gweat time !
smoochie kisses,Asta

We are drooling over the prized stuffies. Where'd your mama get those?

My girl is also big on garage sale stuffies for me & my sissy, Stella. Some of my fave stuffies cost under 50 cents.

It's weird about other dogs at the dog park. I love most other dogs, but if they try to take my ball, I can get a little nasty.