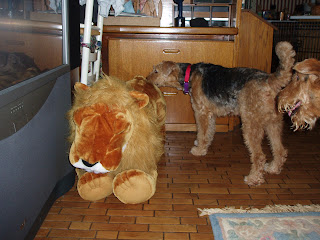 Hi everybody! It's me, Poppy! Mom brought us home the most pawsome toy, this morning. His name is Pokey because, well...first of all, because it starts with a "P" and he doesn't move very fast so we call him Pokey. He's a ginormous lion that used to live at Six Flags and then he moved in with some peeple who didn't want him anymore. They sold him at a yard sale and as soon as our mom saw him, she knew he would be pawfect for the three of us! The first thing Patches did was sniff his butt. 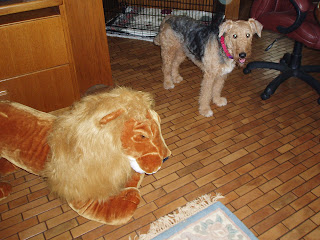 The plan was for all 3 of us to go outside while Mom brought Pokey into the house. We were supposed to be really surprised when we came back in to see Pokey standing in our kitchen. Mom had the video camera ready and Dad had the still camera ready, but there was no big commotion like they thought there would be! Sorry, Mom, but you've pulled this trick on us before and we are on to you! 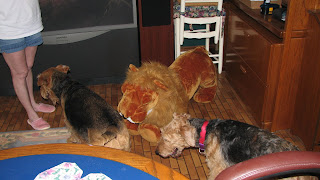 As usual, Penny ran right through the house to hide in her bed because she saw the cameras before she was even in the door. Patches and I were interested in Pokey, but we didn't act like barking fools like we did the last time they surprised us with a new toy. 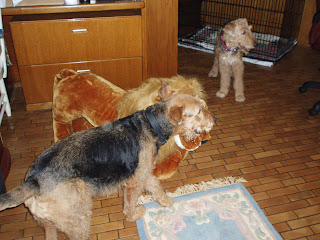 Ever since Pokey arrived, I have been trying to take him into the living room, but he's a little too big and heavy for me to carry. I had him off the floor, but ran into a problem when Patches' crate was in the way. No one would help me, either! Mom and Dad just watched me trying to get him out of the kitchen and they were actually laughing at me. They said they could see my wheels turning. What? I'm not a wheelie! I guess they must have meant that they could see my brain working overtime. 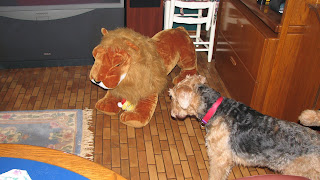 Dad thought they might get a better reaction, from us, if the Funky Chicken was involved. He hid the chicken between the front legs of Pokey and turned him on. That nearly sent Patches into orbit! She hates that chicken! She started barking and attacking Pokey!
Here are some videos of us when we first met our new buddy, Pokey. Sorry they are kind of dark. We're having some storms again, today, so Penny will be wearing her storm shirt any time now! Mom finally took Pokey into the living room, for me, so I am off to hump him because he really needs to knows who's boss around here!

Posted by Princess Patches at 2:37 PM

Aw, at first I thought it was a new airesistah...but a lion is fun, even more fun with a funky chicken. Hope the storms pass quickly!

Hi, 3 airegirls (so jealous!) Thanks for stopping by Winnie Woo's blog and leaving a comment.
I laughed at this lion so much, and the video-especially the camera flashes, I think you guys have your own paparazzi.
-Laurie and Woo

What a nice new friend ! Of course you have to show him who is the boss. You are right !
Penny, don't worry, I sleep almost every night with my t-shirt...we have a lot of storms those days....
Kisses, Faya

I am please to see Patches went for the formal greeting! ;-)

Pokey is a big lunk! How come he doesn't want to play with you?!

My mom says she with you. She doesn't like the funky chicken either! haha

wow a lion in your house!! how cool. He sure is huge, I'd probably try to hump him!

I have never in my life seen a stuffy of such magnitude. Incredible. You never know what those things are capable of, and so I agree that it is best you show it who's boss.

You will make friends when you are ready. That lion is gigantic!!! Even though he doesn't move too fast, you are right to be careful.

Poppy,
That's a big lion in your house, even if he is a little pokey. I'm sure the little Midget would be quite scared. Be very careful!!
luv,
Rambo

Hi, friends!
That lion is huge! and lazy! With all that barking and he did not move!
I think he needs some shaking!
Kisses and hugs
Lorenza

I can see why Patches hates that chicken. Before he even started to repeat himself I was ready to tear through the pooter screen to try to shut him off!

Looks like you guys have a new hump buddy. Hope he brings you hours and hours of fun.

Tell Penny I'm sending her some calming goober smooches for the next few thunder storms you have!

Girls thats a very big lion you have there. Is he tame? Don't do too much Pokey to Pokey.You never know when those kitties are going to get their clawsO ut!!!

Aw, Poor Penny, hope the thunderstorms are not so bad.

Well, you girls may have been able to play it cool with that new lion toy but if I were to discover that in my kitchen, you can bet I would have gone bonkers!
Woof,
Keeley

That is one huge Lion....looks like it's as big as you are...'n yer lots bigger than me... I'd say ya really told that intruder off there....sneakin' inta yer house 'n plantin' itself in yer livingroom like that...the nerve...wonder how long that lion will be in one piece????

That is one huge lion toy. None of my toys are any way near that big so I am jealous! Have fun playing with Pokey.

Haaa Pokey sure is a fun new friend to have. :)

OOhhhh woooow...... how lucky are you's. I can't believe you have a lion in your house oh my goodness. How cool is that. You'd better not make that lion mad. lol

Pokey is awesome but you are definitely right to hump him as soon as possible so he knows what's what.

ps. How is the thunder jacket working? I'm a Thunder Chicken, too. Oops, I mean a good friend of mine is a thunder chicken.

Oh too funny. The chicken song sent Pilar into orbit!! We had to send her back to her crate!!! Silly girl!
Melitta came today!!! Woohoo. Hop on over to our blog and see her. We love her. Ok mom loves her and won't let ANY of us touch her.

Wow
Pokey is hooge...He's boggew than all of you ..I hope you showed him you'we boss Poppy, and Patches is wight, that chicken is a nuisance, hehehe
I hope the stowms didn't bofew Penny too much..I hope the staowm shiwt wowked
smoochie kisses
ASTA