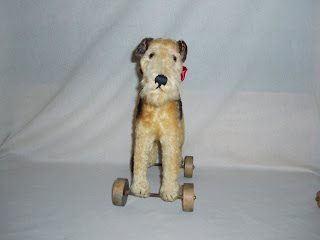 Hello to all our furry and not-so-furry friends! It's me, PorkChop. Thanks for stopping by for Wheely Wednesday! 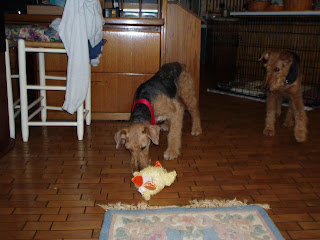 I have been watching those real doggies from my home in the china cabinet and they have been having some really fun times! Yesterday, Mom and Dad went someplace and left all 3 Aire-girls loose in the house. That was the first time Patches wasn't put in her crate when they left. Since it was Mom's idea, Dad told her she was responsible for the destruction. Well, there wasn't any! As soon as they got home, Mom checked the whole house and didn't find a single thing out of place and no potties anywhere! Woohoo! Everydog was a good girl! Maybe it was because they knew I was watching them. I saw all three of them just walking around and napping a lot. This time, our pawrents were only gone for about an hour. Maybe, next time, they will leave them all loose for a little longer. 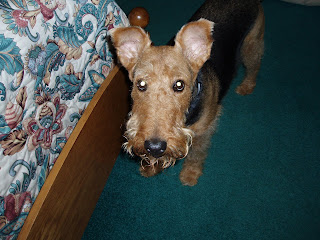 See this guilty looking face? Well, once our pawrents came back home, Poppy and Patches proceeded to play bitey face ALL day long! A lot of times, Penny joined in so there was chaos in our house all day. Dad was trying to watch a movie and Mom was trying to Furminate all the doggies, but they wouldn't stop with the bitey face and bitey legs. Dad squirted all of them with the water bottle several times, but each time, it only broke it up for a few seconds. In between all the bitey face, they did a lot of zoomies. I wished I could have joined them, but it was no place for a wheelie to take a chance on getting eaten!
Mom tried to do an orderly Furmination, but that didn't work out so well. She started on Penny, but Poppy and Patches kept jumping in. Her idea of Furminating one doggie at a time went up in smoke. She finally just used the Furminator on which ever dog she could reach at the time. You should have seen the pile of Aire-hair she got out of all those doggies. For once, nodog ran off with the pile of hair. Usually, at least one of them (Patches) grabs the pile and distributes it all over the kitchen. I think it's pretty funny, but Mom doesn't seem to be amused by it. She says it's really too bad she can't use it in her needle felting. She COULD use it if someone would wash it and separate the black from the tan. She thinks it's just easier to buy wool that has already been washed and the colors separated. I think she's just too lazy to go through all that work! 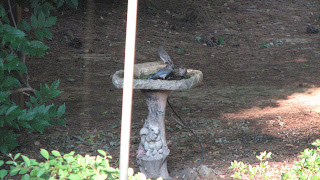 Remember our Bluebird puppies? Well, here's a picture of the three babies in the bird bath. This was taken before they all disappeared for about two weeks. Last night, they came back and we think they are here to help feed the new babies. Mason and Mena have been taking food into the nesting box and dropping it. Their heads always come back out without whatever they took in, so we think the babies have hatched! 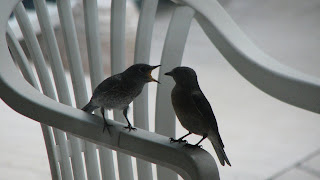 This is one of the first babies being fed by it's mom. The daddy did most of the feeding, but that didn't stop the babies from opening their beaks everytime the mom came near one of them. They are old enough, now, to have lots of coloring so we think at least one of them is a female and one is a male. The third one, we aren't sure about yet. We wonder how many will be in this new "litter"!
Well, everyone, I'm going to rest, now, in my china cabinet. I have to get all psyched up for Mom's vacation. Today is the last day she has to work for 11 whole days! We are sooooo looking forward to it...especially Mom! See you all next Wheely Wednesday!
Aire-hugs,
PorkChop (and Poppy, Penny & Patches too!)


Posted by Princess Patches at 5:13 AM

Glad to hear Patches was a good girl when she was left out of her crate!!

Lookout guys. Those silly birds are experts at dive-bombing dogs when they have babies. Nasty little critters! Don't they know we just want to be friends?

Good morning!!! We don't have birds in our yard... I, Apache Tears, have the "tendency" to catch and eat them... Yep, you heard right!!!! I love to catch the birdies.... And my hooman mommy loves to yell at me about it. I don't get it. Bird..... Bird Dog. What is so difficult about that? Anywayz.... glad to hear that Patches is doing so well with her house training. Maybe we should send a few of our "pups" to her house for training. hehehehhheee

Aireslaps,
Apache and her tribe

That's awesome news that Patches didn't have to be crated! Keep it up - you're doing great!
Those bluebird babies sure have some loving and caring parents!

That china cabinet is a good place to hang out--you get to watch the happenings like it was tv. Good for Patches!! Sounds like she did a great job of not chewing.

Wow I wish my mum had 11 days off...I am sure you will have lots of fun together. I am very proud of the puppies that they did not self destruct home alone.....very proud!!!
Deetz

Hi, guys! We always seem to stop by on Wheeley Wednesdays... PorkChop, you sound delicious! :) Just kidding! We love hearing about (and seeing) the bluebird puppies. We had some in Montana, but the human wouldn't let us look into their house!

You guys have fun--we're sure you will!

PorkChop
Hi!! so nice to see you..good thing you din't get in the middle of that bitey face game..it can get pwetty wough hehehe, but fun...that's such good news that the giwls behaved themselves while youw pawents wewe gone...cool pictoowes of the biwdies..they seem to have the same feeding habits as my sissy Asta, hehehe..have a gweat vacation wif youw Mom
love and wheeley smoochies
Myrna

Nice reporting job done there - thanks for keeping me updated with what goes on when Mom & Dad aren't home.

That's great news for Patches, I was pretty excited the first time I was left out of my crate (so excited that I ate the trash basket)!

That squirt bottle is a thorn in our side too. Good job on your first time home without supervision.

Way to go Patches! Being good is how you earn more freedom!! What a great day the girls had, bitey face, napping and zoomies. I love all three. I could totally fit in with all of you!!

That was a good report, Porkchop! I'm glad Patches passed the test, being out of her crate when your humans were gone. The rules of that bity-face game look kind of complicated. I'm glad you don't try to play it with the girls.

THat baby bird is HUGE! Poor pappa bird must have to work hard to feed him.

Glad to hear everybody was OK loose in the house. Pee-wee still goes into lockdown when momma and master are both out.

it looks like they are playing bitey face in that bird picture. I am so proud of all the girls getting together and deciding to behave. I am sure your watchful eye helped them to behave.

It's so good that you guys have each other to play with. I wish I had a brother or sister to play bitey face with all day long. I do have my friend Olive and Chloe who I walk with Mondays - Fridays, but that sure isn't often enough. That is so great that Patches was a good girl while her parent's were away. My mommy still doesn't trust me because I still get into things when she is around the house with me!

Oh! look at how big those birdy pups have gotten! We have some around here, I like to chase them but then mom gets mad hehe. Watch out for the china cabinet though! I knocked the trash can over once and man I was in trouble! Check out my blog you three, free samples!

Hey Porkchop, what a shame you can't join in bitey face and bitey legs! J x