We're getting Safe Paw and one of us is getting a new bed! 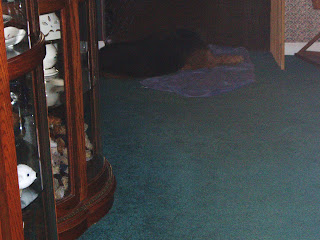 Hello to all our furry and not-so-furry friends! It's me, Patches! Our mom has had a couple of phone conversations and e-mails from the nice man at Gaia Enterprises. (You know...the man from Safe Paw who left a comment on our bloggy a couple of weeks ago)! He gave our mom a couple of places where we might be able to get Safe Paw. In the mean time, our mom's sister is going to get us some from Sam's Club in O-hi-O and ship it to us. Between now and next winter, our mom is going to be a thorn in the side of the peeps at PetSmart and PetCo and some other local places that we think should stock Safe Paw. We CAN'T be the only dog people who need this product! We have found a couple of products that claim to be pet friendly, but when you read the bag, it says it is harmless unless ingested! Yeah, I know, most of us wouldn't actually EAT the stuff, but some of us do lick our paws! (Or in Penny's case...bite our toenails)! We will let you know how it goes with Mom bugging the peeps at the stores! 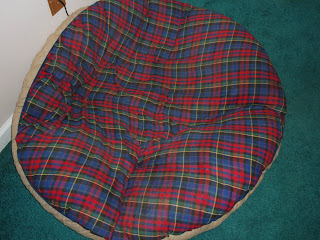 Now...on to OTHER impawtant news! We are the proud winners of the Life With Dogs contest for a new doggie bed! This isn't just ANY old doggie bed...it is custom made by Lilly & Abbie Dog Beds! We picked out our fabrics from their website and now, we are just waiting for our new bed to be delivered! You should really go check out http://www.lilly&abbiedogbeds.com. They have lots of sizes and fabrics to choose from. We are sooooo excited to be getting a new bed. Since we have only two beds and two furkids, it's very difficult for us to get our beds washed. You see, my bed is 48 inches in diameter and Penny's is 52 inches in diameter. They won't fit into our washing machine! Mom has tried taking them to a laundromat, but she would really prefer to remain alive, so she gave up that idea. She also called a bunch of dry cleaning companies and they said, "No way!" Okay, with the new bed, we are getting, somedoggie will get to sleep on the new bed while our old one is being washed. Yep, our mom takes them (one at a time) out to our deck. She sprays a pet friendly cleaner on the bed and then blasts it with the hose. The problem is that we can't exatcly put the beds in the dryer, so it takes about a week for one bed to get dry. We will be sure to let you know when our new bed gets here! 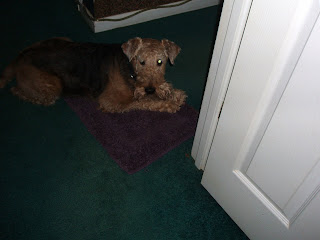 After all the snow we had, last week, our back yard is one ginormous mud hole! Yep, the snow is all gone and there is just a whole lot of red clay mud in it's place! Our mom put an old towel down by the back door and just inside the living room on the carpet. She thinks maybe it will help to keep some of the red mud off the throw rug and the carpet. We don't think it will work, but at least she tries!

Well, everydoggie, that's it for today! I'm headed out to bark at the peeps next door. They are doing something to their basement and we can't figure out what it is. Mom says they are "finishing" it, whatever that means! If it wasn't "finished", how could it hold up the house? I'm just askin'....

Aire-hugs,
Patches (and Penny the toe-nail biter)
Posted by Princess Patches at 10:55 AM 19 comments:

We have a winter wonderland! Khyra should be HERE! 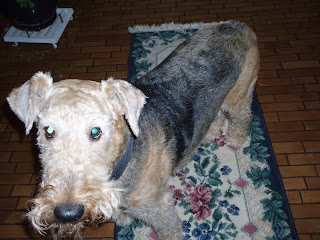 Hi, every buddy! It's me, Patches! We have loads of snow today! Khyra should be HERE...unless, of course, she has her OWN! This is only the second major snow storm since our pawrents moved to Georgia 18 years ago. The last one was in March of 1993 and it was over TEN inches! They had only been here for 4 months and Mom was wondering what in the h-e-double hockey sticks Dad had done to her! They moved here from Arizbona where you have to look at a calendar to remember what season it is! 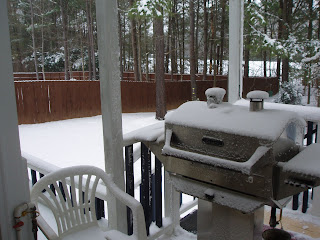 Oh, yeah...I forgot to tell you...it was raining right before they got here and it rained for the next 3 months and then dumped the 10 inches of snow on them! Our mom was NOT amused! 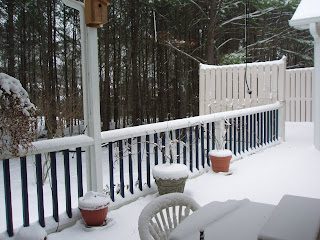 Of course, the TV channels have been talking about this snow coming for DAYS! Usually, when they do that, we only get a few drops of rain or snowflakes. But, THIS time, it was different! We went to bed last night, around 10:30 and it wasn't doing anything outside! Well, when we demanded to be fed at 4:30 this morning, we had already had about 5 inches of snow. 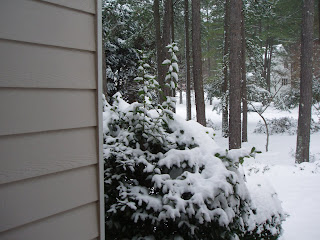 Our mom was worried about the OLD dog (Penny) going up and down the steps, so a little while ago, she (Mom...not Penny) went out and cleaned off all the steps and put some sea salt on them. She wasn't sure sea salt would work, but it does! 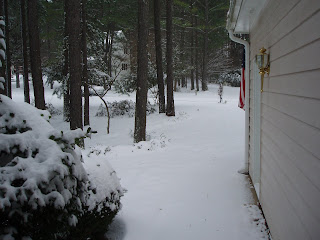 Mom ordered us some pet safe ice melter from Ace Hardware, but it won't be here until tomorrow! That will, pretty much, guarantee that we won't have any more snow for THIS year! She has been trying to find some stuffs called Safe Paw Ice Melter, but the closest store that sells it, is in Kentucky! Yeah, she could buy it online, but the shipping charges are almost twice as much as the actual ice melter! 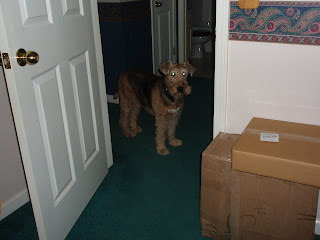 We both had a major case of snowface, this morning, but our mom wasn't fast enough with the camera! That Penny plows through the snow like a snow plow! Face first! I, however, am a little more careful. I don't plow through it, but I get plenty of snowballs stuck to my furs! Then, when I come inside, I sit on the rug in front of the back door and whine for Mom to remove my snowballs. She just calls me a drama queen and goes back to whatever she was doing! The NERVE of that woman! I thought she KNEW that I am a princess!

Well, every buddy, our personal secretary is off to make some beef stew, now and we will be sitting in the kitchen staring at her until she gives us a bite!

Aire-hugs,
Patches (and Penny too)
Posted by Princess Patches at 10:25 AM 20 comments: