Today is my 7th barkday! 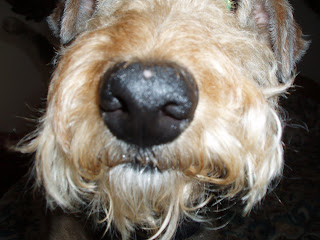 Hi every buddy! It's me, Patches! Today is my 7th birthday! I haven't got any presents yet, but I got some special stuffs on top of my breakfast and then I helped Mom eat HER breakfast. She says her and I will go on a special walkie later! 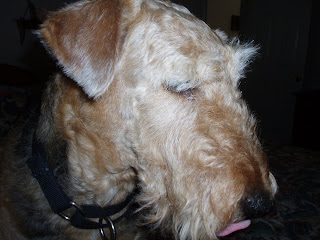 Monday was my second Gotcha Day too! Yep, it has been two whole years since Mom and Aunt Wendy rescued me from that lady who didn't feed me enough. I certainly don't have THAT problem anymore. Mom says I get TOO much to eat, now. I didn't get any presents for my Gotcha Day either, but I got to spend some quality alone time outside with my mom. Our neighbor is replacing his deck so there are peoples over there all day and Penny can't stop barking at them, so she had to go inside. Not ME, though! I was a good girl so Mom let me stay out and watch her trim bushes. 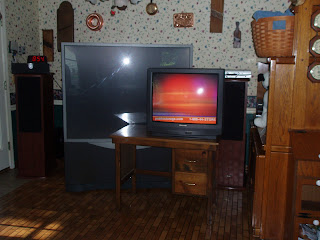 Remember last week when we were barking at the TV installers? Well, this is the "before" picture of what was going on. Our dad's 64 inch TV quit working on the day before Thanksgiving and it was going to cost way too much to fix it, so our mom had the hospice peoples move a TV from the 'puter room to the kitchen so our dad could have a TV to watch. This is what it looks like NOW! A new TV that isn't quite as big and even with the TV stand under it, it takes up lots less space. We can actually see the wall again! The TV guys actually had to come twice because our mom noticed scratches all over the top of the stand when they left. She went back to the store and picked out a different stand so they came back on Tuesday to swap them out. Last Friday would have been our pawrents' 30th anniversary, so the TV is a present from our mom to herself. I wonder if she'll let me go get my own barkday present! I hear that it's a sure way of getting what you actually WANT!

Well, every buddy, I have to go and try to get Penny to come in, now. Any minute, now, the peeps will be coming to work next door and I'm pretty sure they would prefer to work without all the barking!

Happy Memorial Day to all our buddies in the U.S. Don't forget to thank our military peoples for keeping us safe!

Aire-hugs,
Patches (and Penny the barker too)
Posted by Princess Patches at 7:09 AM 38 comments: 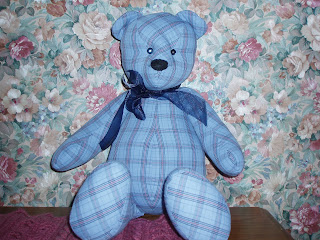 Hi, everybuddy! It's me, Stanley the memory bear! The wonderful peeps at hospice had me made from Penny and Patches' dad's jammies. They even named me after him. Yep, his name was Stanley, but everyone called him Stan. I have my very own home, now, on top of the dresser where I can watch over Penny, Patches and their mom while they sleep. The real Stan thought it was really funny when he found out there are two DWB doggies with his name! I'm going to turn the blog back over to Penny now and go back to my guard duty. 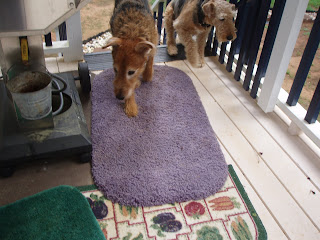 Hi, everydoggie! It's me, Penny. As some of you may know, I had surgery a few weeks ago. I was due for my Spring Airecut right around the time of my surgeries, so Mom decided to wait until I was all healed. Well, the time has come. The first two pictures are before my spa day. 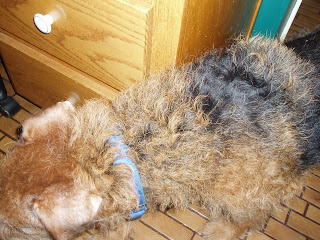 And now, for your viewing pleasure, here are a couple of me with my new Spring Aire-do. Yeah, Mom had to sneak up on me since I'm still scared of the flashy box! 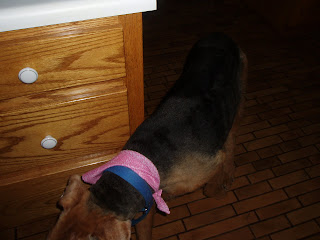 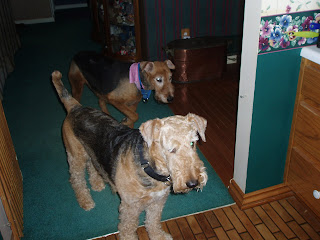 I sure do feel a lot cooler now! And I smell really good too! My poodle leggie is all gone. I still have what looks like a zipper on my back, but it's fading fast.
By my next Aire-cut, you won't be able to see it at all.

Well, everybuddy, I gotta go help my mom get ready for the TV installers. I gotta tune up my "barker" 'cause they will be here for about 3 hours and Patches and I will have to bark at them everytime they go out the door and come back in. It's just what we DO! We will get our mom to take some pictures so you can see the "before" and "after".

Aire-hugs,
Penny (and Patches too)
Posted by Princess Patches at 8:59 AM 26 comments: 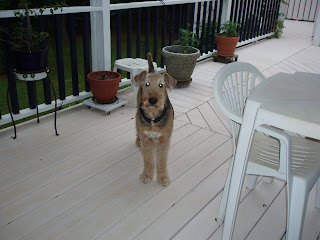 Hello to all our furry and not-so-furry friends! It's me, Patches! We've been bloggin' for over 2 years and we just now got to our 200th post. That's pretty lame, Mom! Lots of our blogging buddies post nearly everyday, and it took US over two years to get to #200! That's pretty sad! 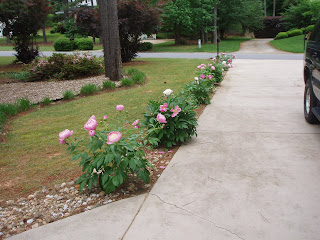 Our lazy (SHE says "busy") mom finally got some pictures of the Peonies that are on one side of our driveway. Since stoopid Vista won't show them to us anymore and our old mom doesn't have that great of a memory, we'll just show them to you! 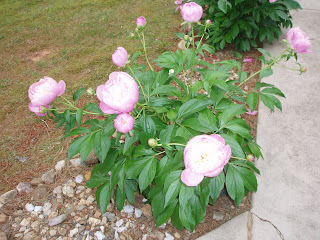 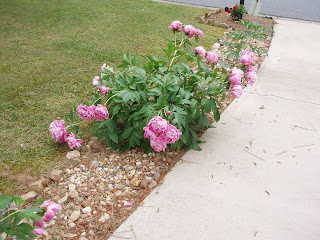 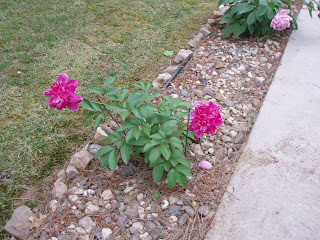 I hope you enjoyed the Peonies. Some of them are looking kind of sad, now, because we had really, really, really heavy rain last night. At least it waited until our mom got home! Penny and I would have been really freaked if Mom hadn't been home when the thunders started! Penny taught me to bark at the thunder because it makes it go away. Okay, it only goes away for a few seconds, but hey, it WORKS! We keep barking and it keeps stopping! For some strange reason, our mom just doesn't "get" it. She yells at us and squirts us with a water bottle, but it doesn't stop us!

Yesterday, the hospice that took care of our dad, had a Celebration of Life service and our mom went to it. It took her a loooong time to get there and a looooong time to get home, but she said it was very nice. Kind of sad, at times, but still nice. They gave our mom a teddy bear made out of a pair of our dad's pajamas. She knew they were making the bear because they asked her for the PJ's, but she thought it was going to be a very small bear. She was wrong! This bear is about 2 feet tall! We'll have to show it to you later because Mom forgot to take a picture. Now, the bear is sitting on what used to be Dad's dresser so he can watch over us as we sleep!

Penny is going to the groomer on Tuesday! Heeheehee! It's her turn to get the whole works! The place on her back is almost all healed up now and the test results say it is nothing to worry about. Her nipple that was swollen is a different matter, however. It had some melanoma cells, so we have to keep a close watch on Penny to make sure she doesn't have any problems breathing and doesn't have any unexplained weight loss. Our v-e-t says he thinks he removed it before it could spread, but he just wants our mom to be aware. He says it's kind of common in older doggies and right now, Penny is acting younger than she has in a long time, so unless there is some kind of change, we aren't going to worry about it.

Well, everybuddy, I have to go and get psyched up for the thunder boomers that we are supposed to get AGAIN this afternoon and evening! Our mom sure hopes it stops before it's time for us to go to bed. I guess she thinks it's hard to sleep with 2 barking dogs! While Penny and I get psyched, our mom will be watching the Nascar race. Yep, she's a closet redneck! She never paid any attention to Nascar races until she moved to Georgia and pretty much everybody talked about the races on Monday. She figured she needed to know what everyone was talking about so she started watching the races. She's not such a fanatic about it anymore since Dale Earnhardt was killed in the Daytona 500 in 2001, but she watches just enough to know who wrecked and who won the race. I guess that makes her only a partial redneck!

Our teefies are all clean! 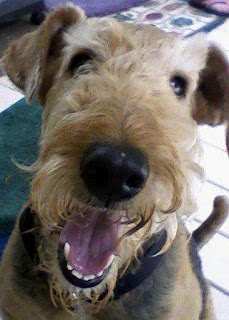 Hi,everybuddy! It's me, Patches! Penny and I both have really clean teefies now. See my pearly whites? On Tuesday, Penny got all her staples out and it's a good thing she had a v-e-t appointment because she was having a problem with one of her feetses. When she was only about a year old, our pawrents were putting the wood floor in our kitchen. The old floor had been removed exposing only the wood sub-floor. Well, there were some gaps in it and Penny got a toenail stuck. She pulled so hard, to get free, that the whole toenail came off. Because of that unfortunate incident, that toenail has never grown back correctly. It either turns to the side, or it disappears completely.

On Monday night, Mom noticed that Penny was limping so she set out to find out why. Well, her toe was all red and hairless! The vet shaved off the rest of her furs on that toe and cut the toenail back to nothing. She's on ant-eye-bioticks and she has to have some spray put on her foot three times a day. It's already looking much better and she isn't even going to have to wear the cone of shame because she's leaving it alone. Yay for Penny! 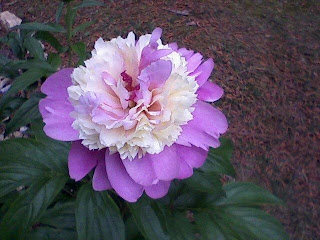 This is a picture that Aunt Wendy took of one of our mom's Peonies. Isn't it pretty? It's called Parfait "something or other". Aunt Wendy was here for our dad's memorial.

Not a lot of people came, on Saturday, but that's okay. It was very nice anyway and some very impawtant peeps in our lives did come. We saw Aunt Wendy and Unkle Bill, Mack and Sally Ann's mommy and our dad's best friend and his wife. It meant a whole lot to our mom to have these peeps come and see us. We also got some beautiful flowers from Scruffy, Lacie, Stanley and Mumsie. Sorry we don't have a picture...our mom just plain forgot to take one. We also got some pretty flowers from the Airedale Rescue Group. Again, sorry there's no picture. We really need to get our mom back with the program!

Well, everybuddy, I guess that's about it for today. Penny and I will be home alone for a while 'cause our mom is running away with Aunt Wendy again. She says they won't be gone a really long time. We'll SEE about that! I guess it's okay as long as she comes home before it's time for us to EAT!

Aire-hugs,
Patches and Penny
Posted by Princess Patches at 9:39 AM 21 comments: