I have picked up some new (bad) habits since I am the only doggie around here, now! 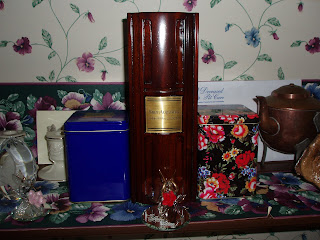 Hi, everybuddy! It's me, Patches. My mom says I am starting some bad habits since I am the only doggie around here, now! As soon as my mom goes out the door, I howl like a coyote howling at the moon. I can see her out in the front yard, but I can't get to her, so I howl. I never did that when there were three of us or even two of us! Maybe I'm just lonely! 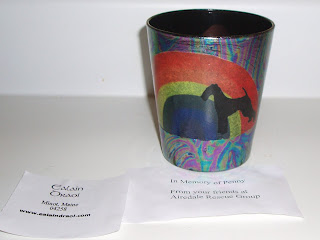 I know these pictures are screwed up again, but I will tell you what they are! The first one is Poppy, Penny and Dad's final resting place (ok it isn't really FINAL, because eventually, we will all to go a vault in Ohio. We are hoping that will be a loooooong time from now. 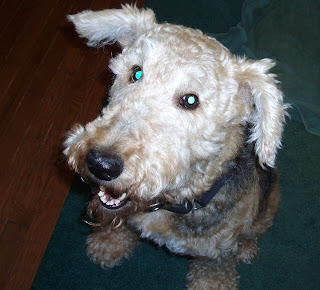 This last picture is ME! I'm getting very close to needing my furs cut, but Mom wants to wait as long as possible because I don't get fur cuts in the winter time. Yeah, I know this is Georgia, but we do get some really cold weather in the wintertime!

Until next time,
Aire-hugs,
Patches!
Posted by Princess Patches at 3:09 PM 16 comments:

Okay, here's what happened with Penny... 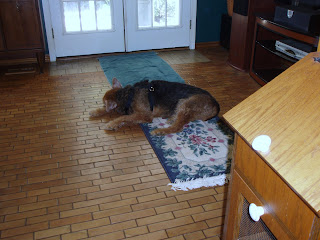 Hey, everybody, it's me, Lana. I know a lot of you are wondering exactly what happpened with Penny, so I am going to tell you.

You all know from previous posts that she was having trouble getting up and down the steps. Well, I had her convinced, finally, that we should go out through the garage. I had it down to a fine science...I asked Patches if she wanted to go outside through the back door and then as soon as she went through the door, I shut it and told Penny to come with me. It took a while, but she finally got used to the routine. After several times of going out front, she became afraid of my security light. It doesn't come on immediately when you go out in the driveway...it has to detect body heat first. When it came on after we were already out there, she bolted for the house with me in tow.

She was having a very hard time getting up from a sitting position, even on the carpet. Her sight and hearing got really bad and she was doing poopies in the house during the night. Up until last Wednesday morning, the biggest problem was her breathing. She was panting constantly and by last Tuesday, I could tell that she was wheezing with every breath and it was a struggle for her.

On Wednesday morning, she insisted on going down the back steps, so I held onto her harness and helped her all the way down. I went back up the stairs so I could see her better. She always took a tour of the perimeter of the fence and I watched her go most of the way around and then she disappeared. It wasn't quite light outside yet, so I couldn't see her once she went into the woods, but I should have been able to hear her walking in the leaves. I couldn't hear the leaves nor could I hear her breathing. I ran in the house and got a flashlight so I could find her in the woods. I located her and when she saw the flashlight, she headed for me, but I could tell something was wrong. Her back legs, one at a time, would fly out behind her and then she would drag each foot through the dirt. I watched her do that all the way to the house and I could tell it was involuntary. When I finally got her to the steps, I put my hands under her and lifted her up each step. Fortunately, she was still in control of her front legs and she helped me the best she could.

Once she was on the wood floor in the kitchen, her legs just didn't work at all. She would try to get up and then just do the splits with her back legs and she kept looking at me like she was saying, "HELP ME, Mom!" The first thing I did was call Wendy and she said it didn't sound good and I needed to get to the vet right away. Well, there was no way I could get her into my Tahoe alone, so I called my neighbor and he came over and put her in there for me.

When we got to the vet's office, one of the girls at the desk carried her into a room for me. Once the vet came in, he took one look at her and said, "I'm soooooo sorry". He said she was in heart failure and probably wouldn't last anymore than a day or two. At that time, I made that dreaded decision that none of us want to make. I just couldn't let her suffer anymore. I also decided that I was going to stay with her to the end. I had never done that before...I had always said my "goodbyes" and left before he did what he had to do. He gave her a sedative first and I was kind of wishing he'd give ME one! Without going into the sad details, my Penny just went to sleep while I petted her head and the vet talked to her constantly. It was a very sad and yet peaceful experience. Even as hard as it was, I'm very glad I stayed with her.

Now, it's very strange only having one dog in the house. Patches just isn't herself yet, either. She's sleeping a lot and not playing with her toys at all. She sleeps part of the night in Penny's bed and part of the night in the living room. She's free-feeding for the first time since she came to live with us. I put her food in her bowl and it might take her several hours before she eats all of it. I'm used to seeing it devoured in less than 30 seconds. I guess she is grieving too!

Thank you to all of you who have sent your condolences to us! I want to get around to each one of you and thank you personally, but I'm just not sure I can do that at this time. Between my profile and all the groups I belong to on Facebook and my blog, I think there have been about 200 peeps and pups that have commented and I really appreciate every single one of you! Somehow, it helps to know that others care! That's why I am so glad I belong to Dogs with Blogs and about 99% of my Facebook "friends" are "dog people". Thanks to all of you for your support! And a huge thank you to Wendy! I don't know what I would do without you and I hope I never have to find out!

Aire-hugs,
Lana (and Patches too)
Posted by Princess Patches at 3:03 PM 30 comments: